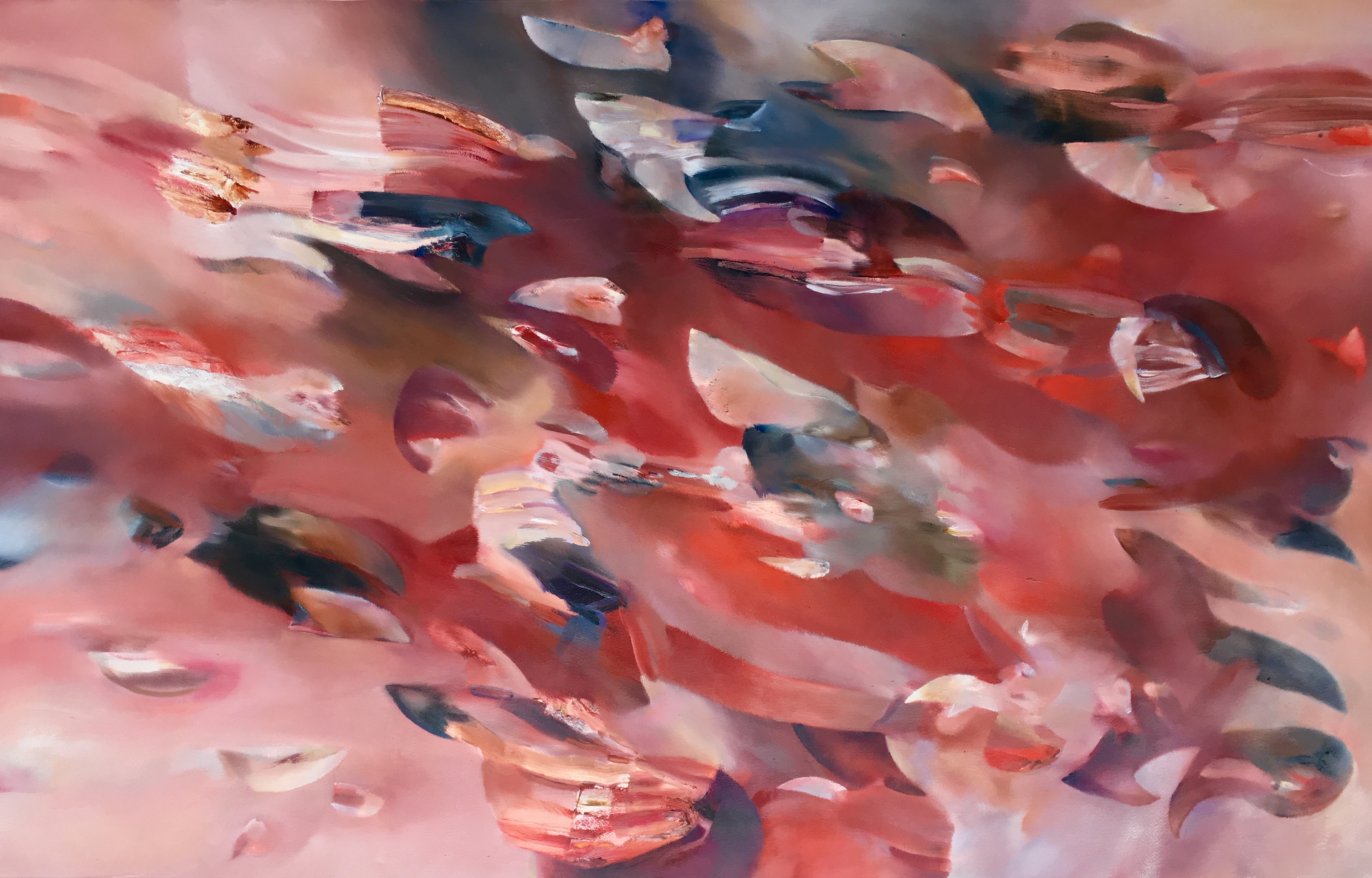 Water & Stone is a response by artist Stephanie Reisch to abstract ideas involving light, space and time in relation to the Swan River precinct. Explored primarily through the sibylline navigations of the jellyfish, an ancient and primordial hunter, the rich history surrounding the archaeology of the river networks, sand beds and underwater cave systems is paralleled with tactile negotiations involving water and stone.

The River is Not Blue

Alchemy, even shamanism, has been linked to Stephanie Reisch’s use of the physical fragments of once-living creatures in her paintings. It is intriguing to know that on a particulate level the life of a thing is prolonged through its embedding in her work: that the work contains life. When I met Stephanie many years ago, I was intrigued by her collection of animal bones. They were organised into little compartments and vials, and Stephanie told me that she put them in her paintings. Put them in, I thought, and I searched the canvases, seeing no little jawbones or tiny femurs visible among the strokes and clots of paint. She told me that her paintings ‘responded’ to them.

Without the caption, an onlooker would not know that such a conjuring is at work, which means the impact of this alchemy is twofold: the first is that the knowledge of its presence might change the way the observer perceives the work, to lend a kind of power to the piece, or change the way they visually sift through it. The second, and what to me holds a greater fascination, is how that material incorporation of the special thing, the vital thing, the valuable and powerful thing that is the vestige of the animal, might be intrinsic to the production of the work. How it might be instructive to the artist – how it might guide the making of the work, the thinking about the work, how it might both literally and figuratively get inside the work and shape it. Austrian architect and artist Walter Pichler was known to damage his paper, sometimes through the continual laying down of pressure and wet media, but sometimes before he even began drawing, so that the marks and folds might offer him ‘cues’. It is engaging to imagine how in Stephanie’s case the bone dust and particles could curate the painting – how she might meditate on the beings themselves, becoming closer to their lives in the act of working on and with them, that she might bring their intelligence to bear. Deep and complex, elemental and not a little ghostly, ethereal and occasionally visceral, her paintings testify to a communion with her subjects whether physically embodied in the painting or carefully studied.

The way I ‘read’ Stephanie’s paintings is inward and outward, with no reliable continuum – what I thought was foreground might shift to back, or what I thought positive, negative. I am reminded of Peter Cook’s observation of Masaharu Takasaki’s Free Architecture, “momentarily we cling on to a profile, another clue or hint of a change in surface or an orifice”, but implicitly we continue to float along until we find anchor again. The overall effect is of things in suspension, which is why this work, focusing on the Swan river precinct and its manifold acts of water (immersion, weathering, flowing) makes for an apt territory for Stephanie’s exploration. Jellyfish are one of the main subjects in this series. Failed tests at painting with their vellum lead instead to imagining the territory from their vantage point beneath the water. In particular,

Stephanie has focused on the Moon jellyfish, who navigate with currents and light levels. Almost transparent, their bodies articulate and reflect these forces. Jellyfish, which are highly sculptural when suspended in water and utterly floppy when removed from it, and limestone, rigid and structural but made tenuous and delicate by weathering: these subjects seem well suited to that notion of compositional drift and a flip-flopping between positive and negative form.

The colours, too, are rich and varied. I am reminded of Salvador Dali’s insistence that “New York is not white. New York is all round; New York is vivid red.” The Swan River is not blue – it is teeming. It is tiny seahorses known nowhere else. It is swans, bull sharks, algae, dolphins; it is sometimes a thick bloom of jellyfish. It is the blood-red bearer of colonial disruptors, life-giver, shell midden; it is a rainbow trail.

The University of Western Australia 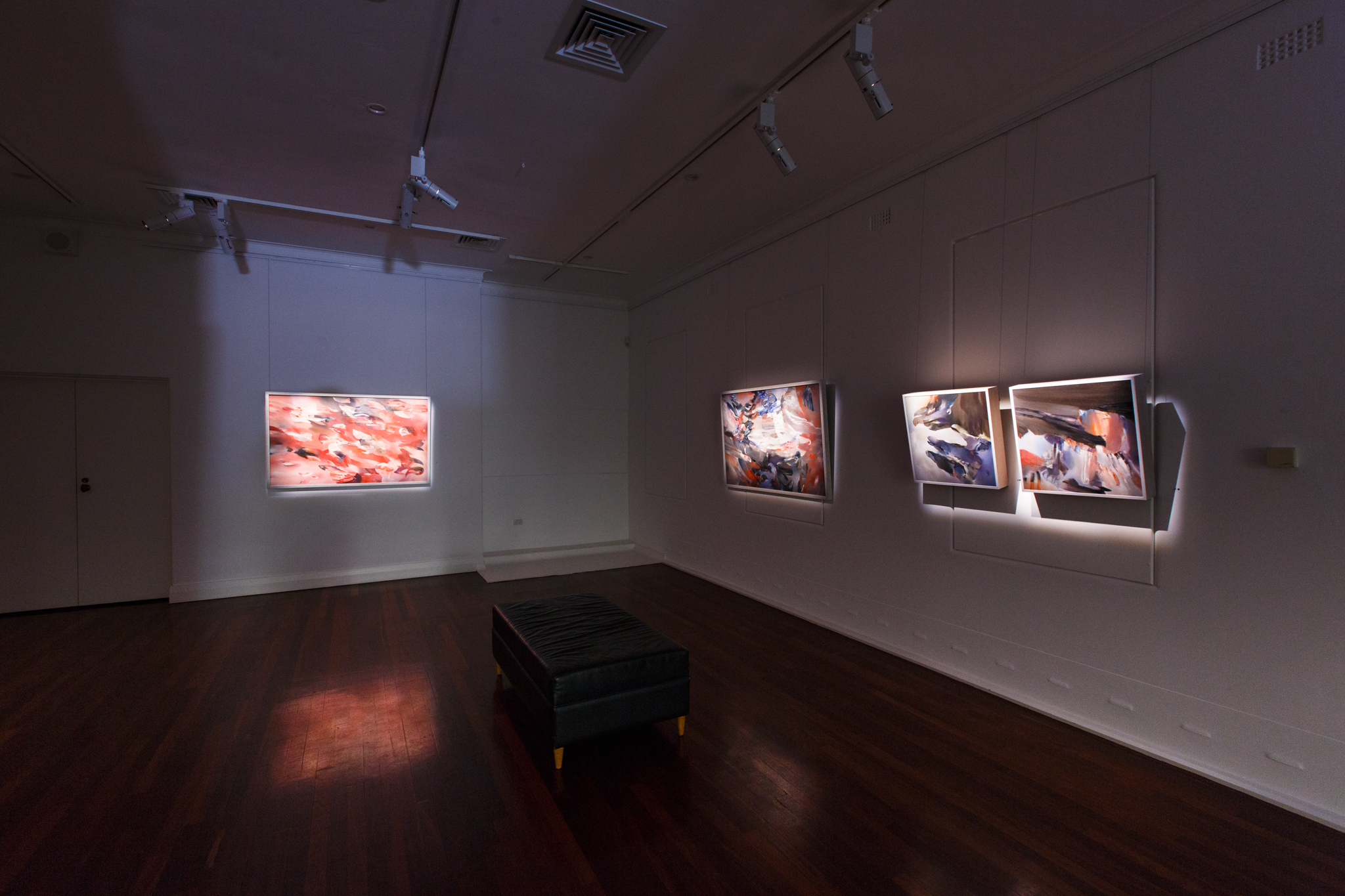 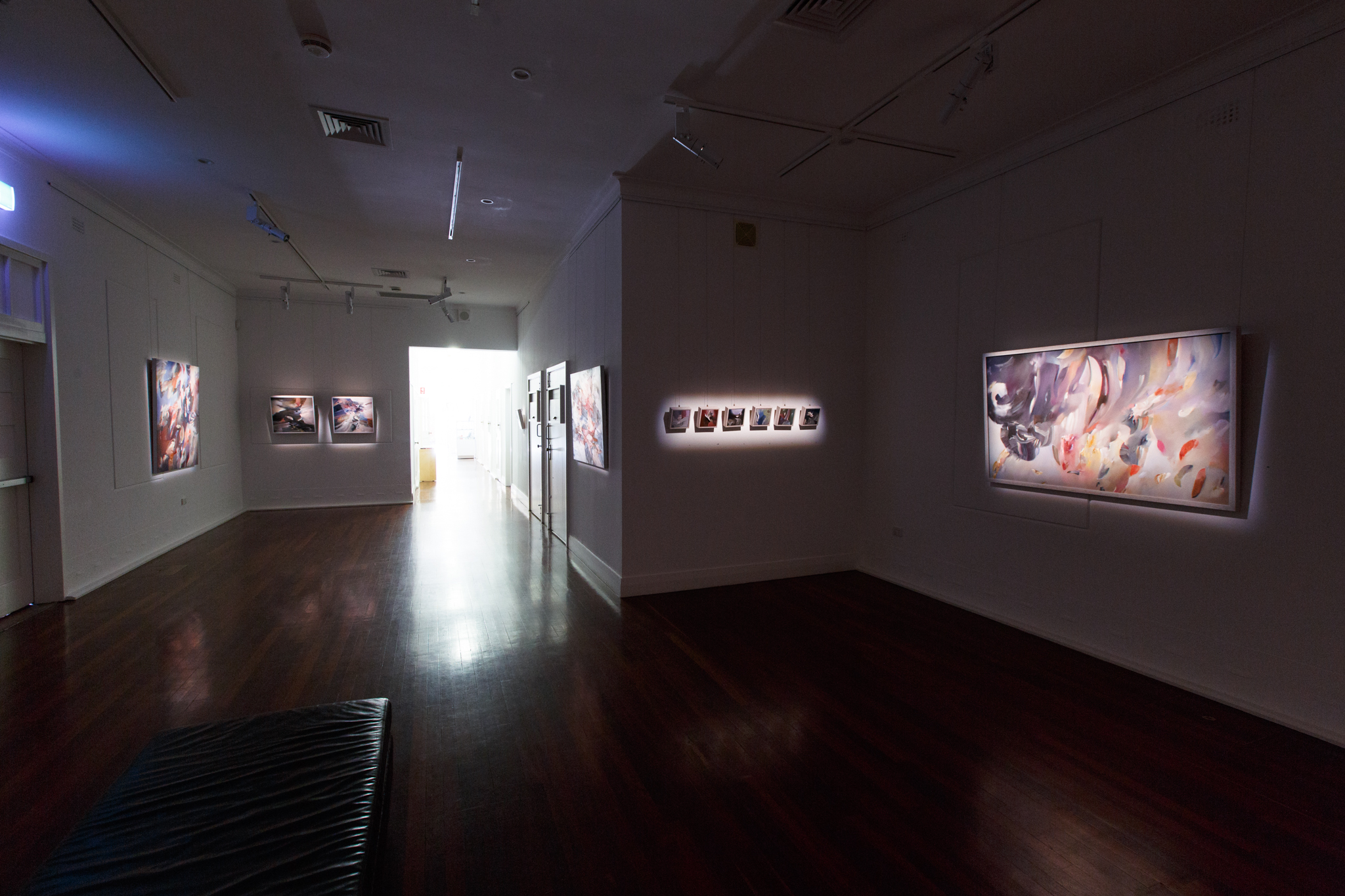 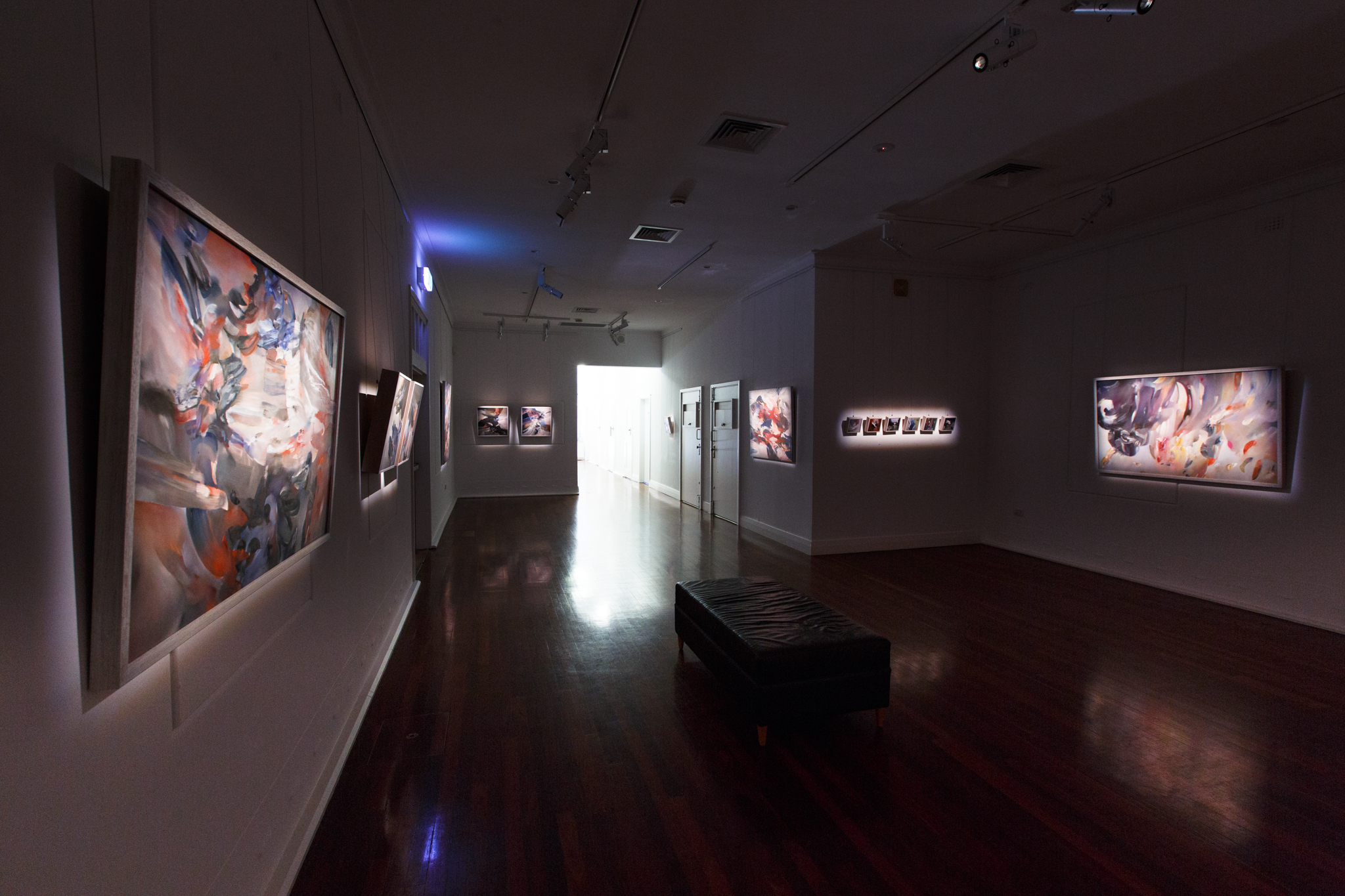 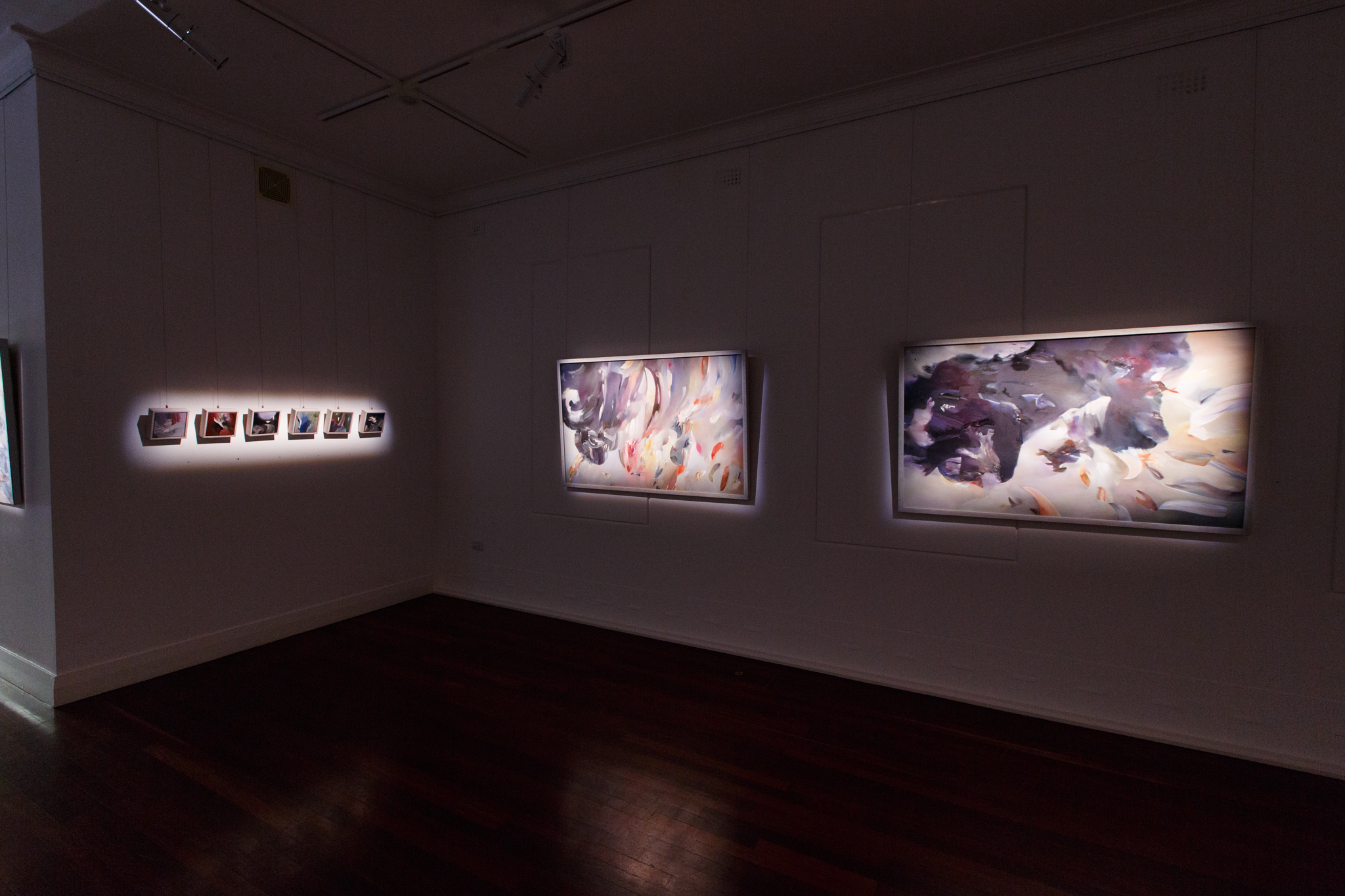 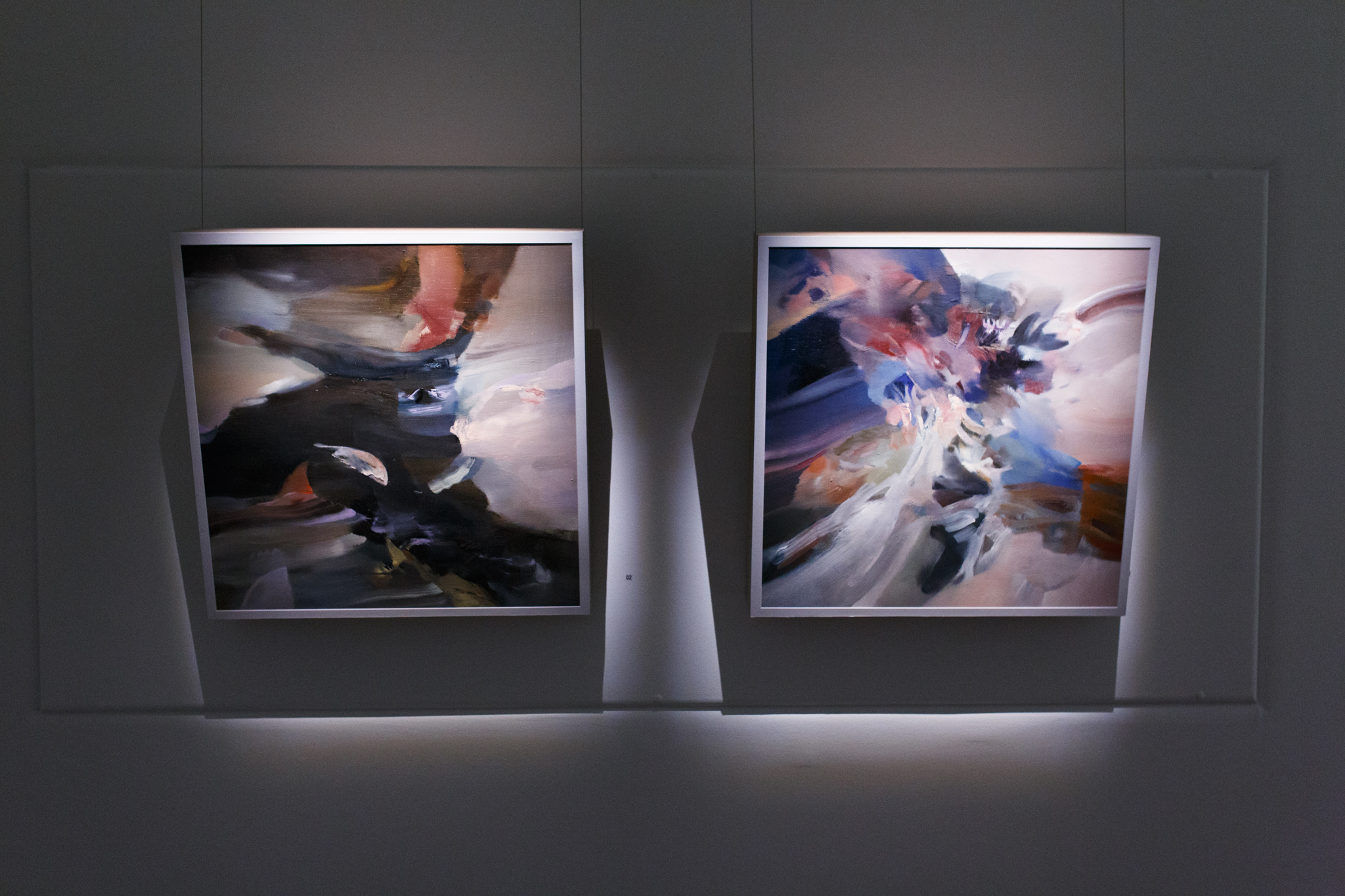 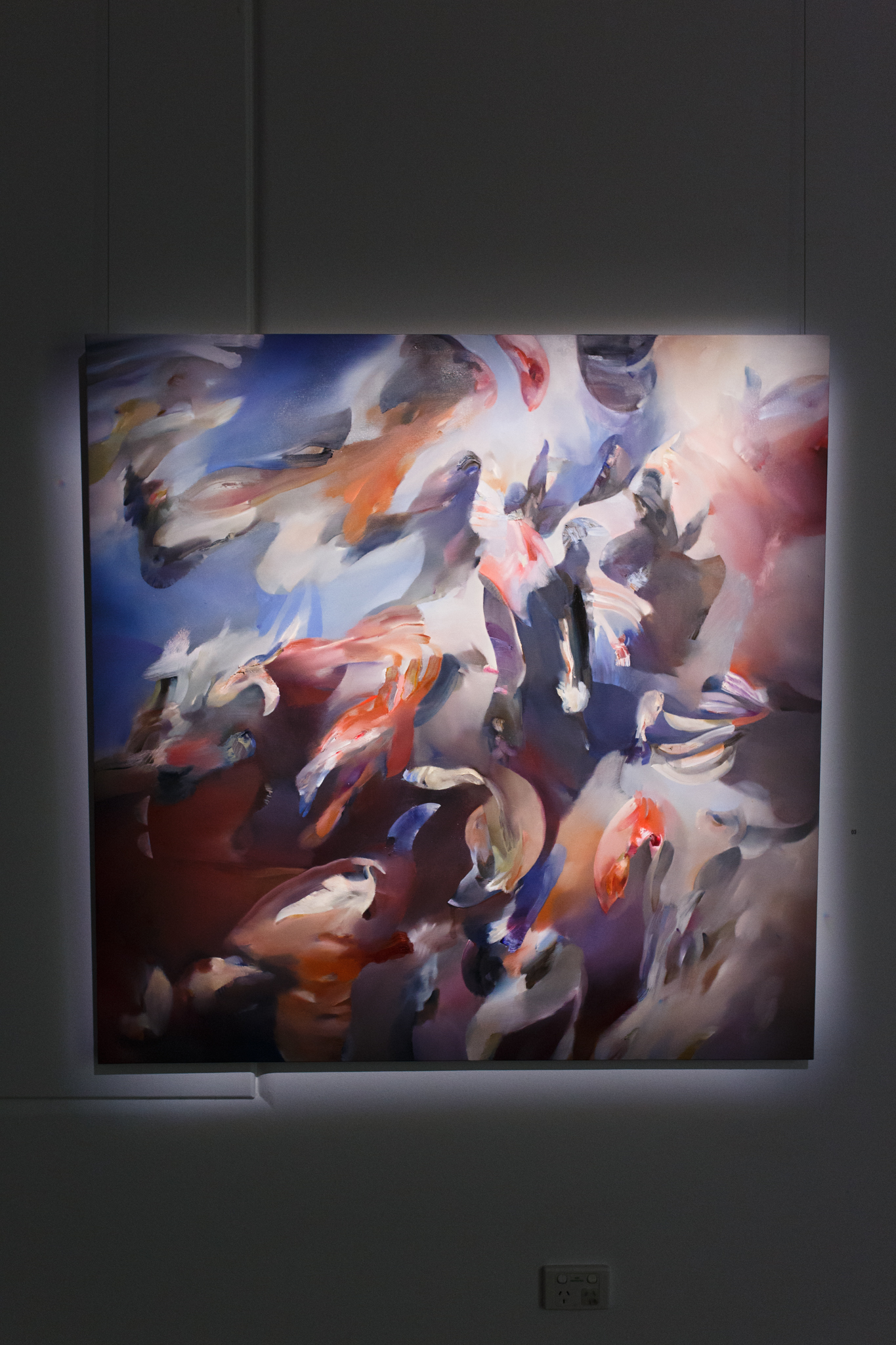 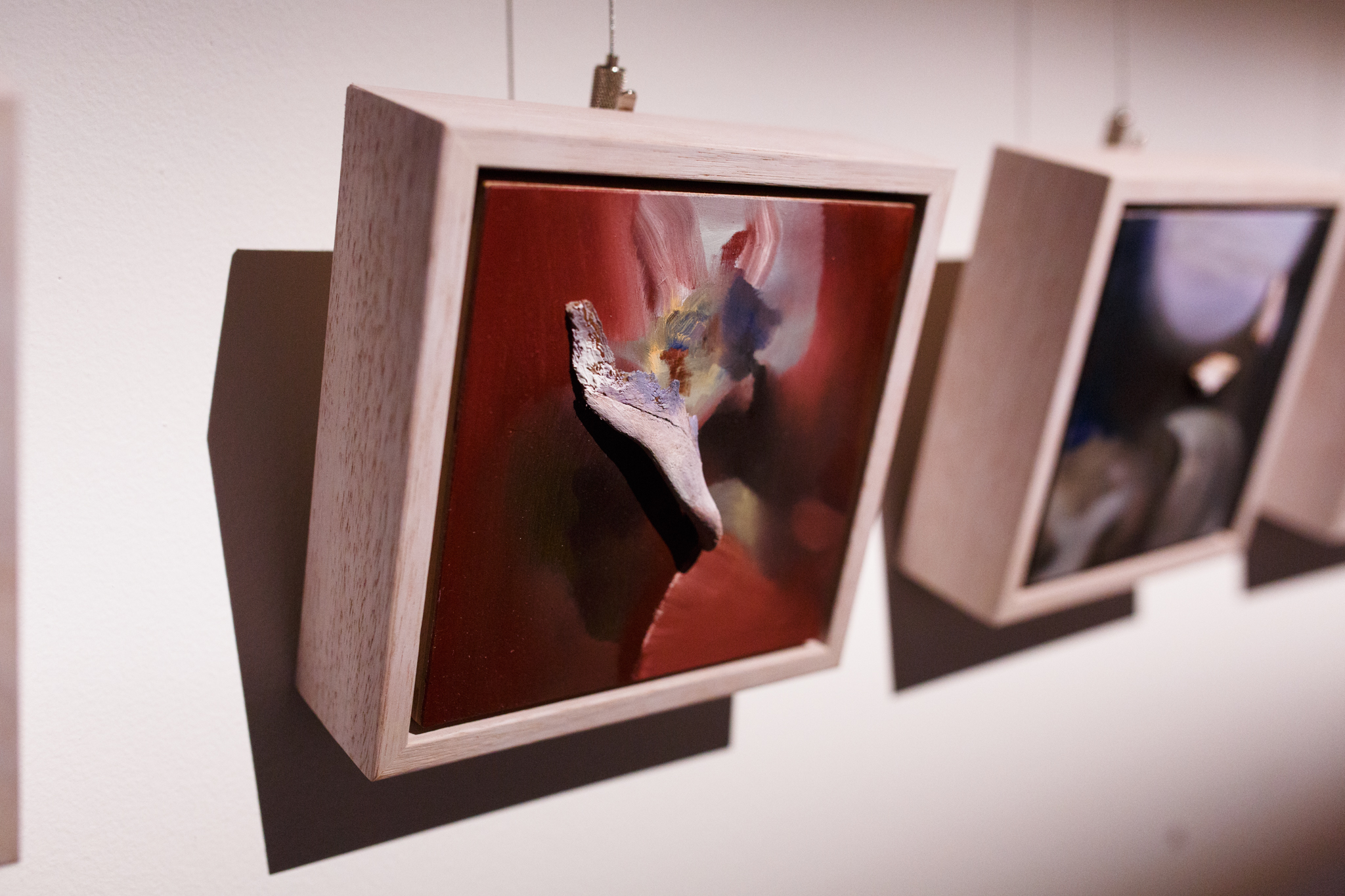 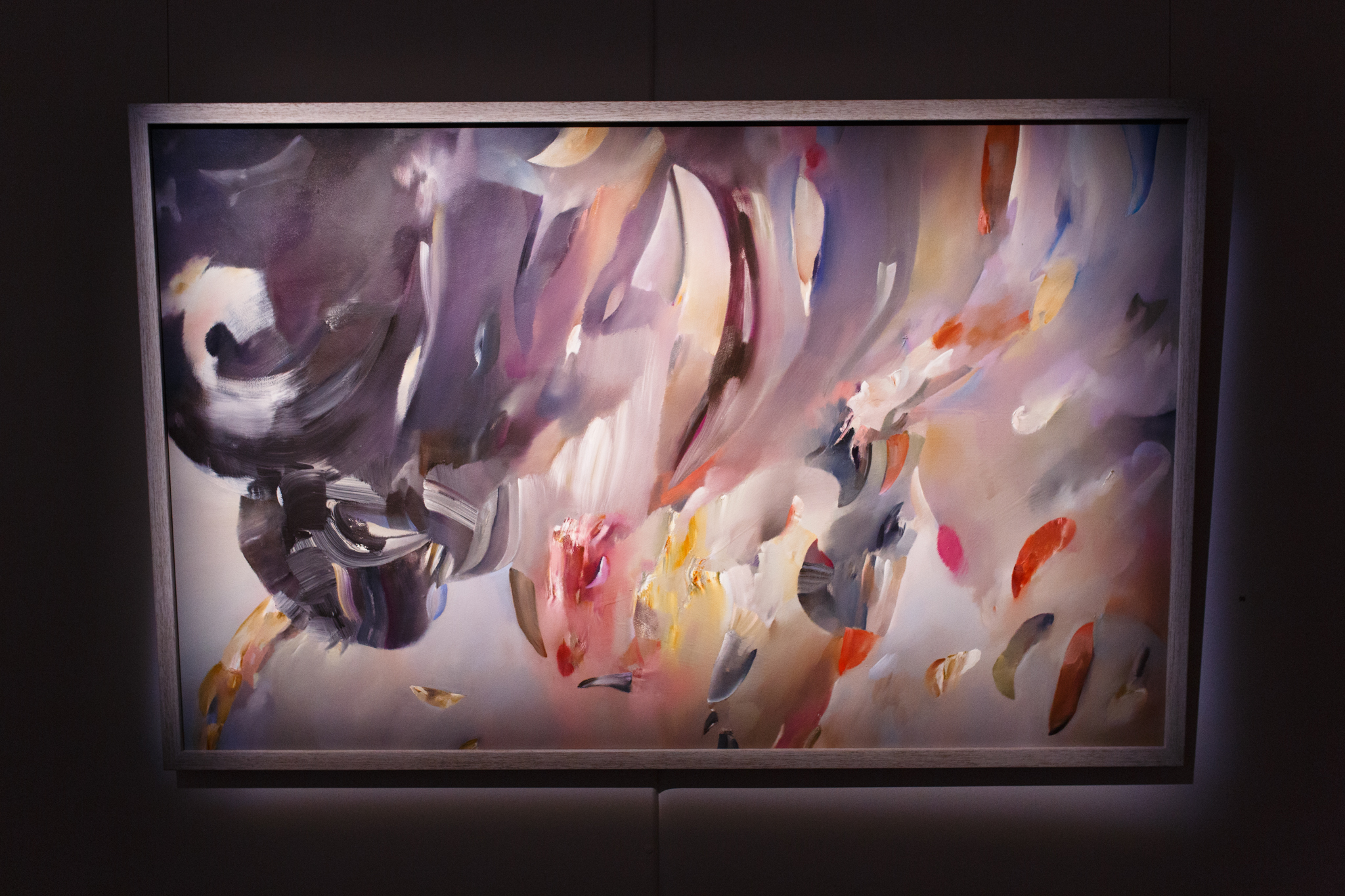 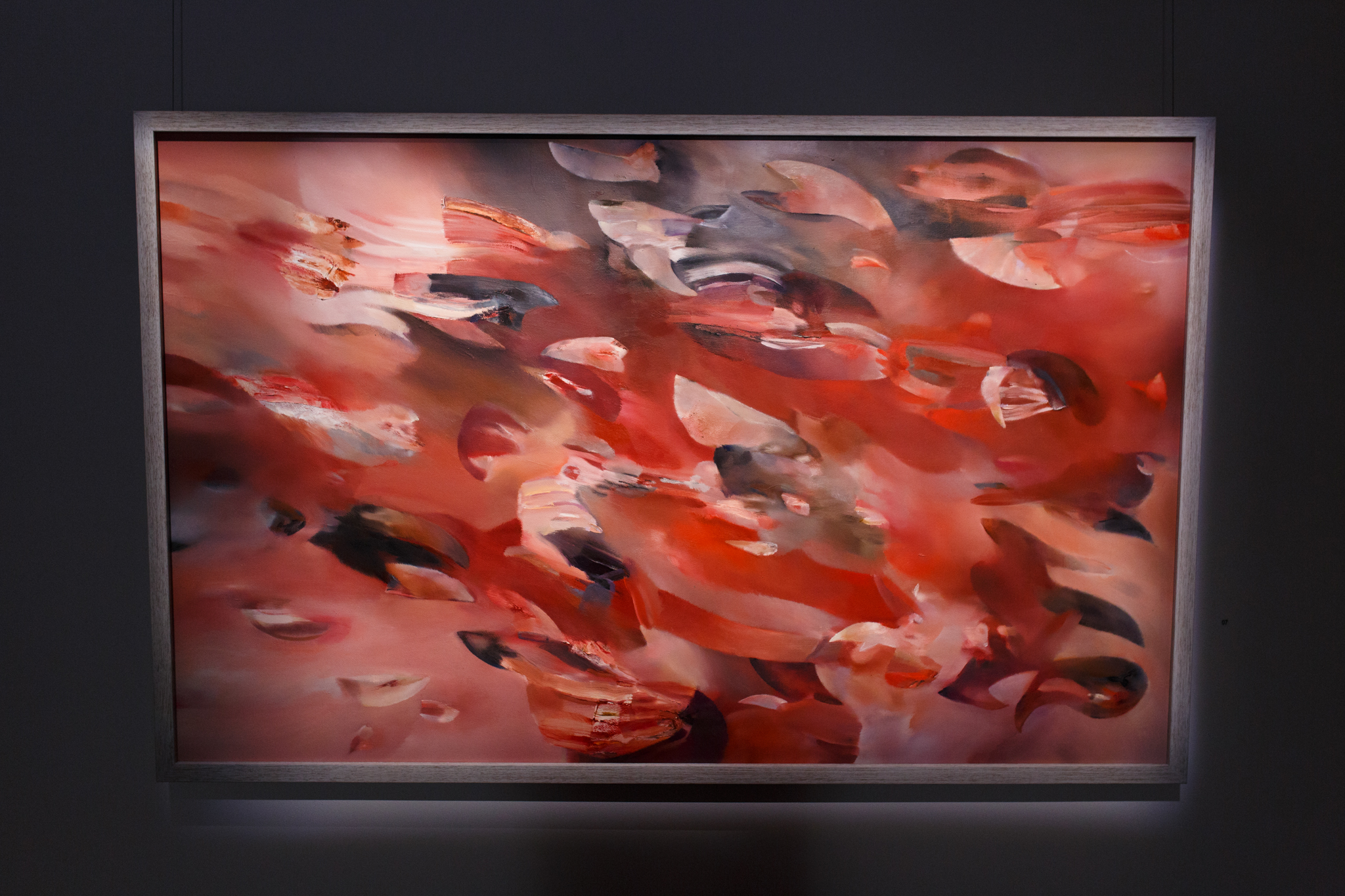 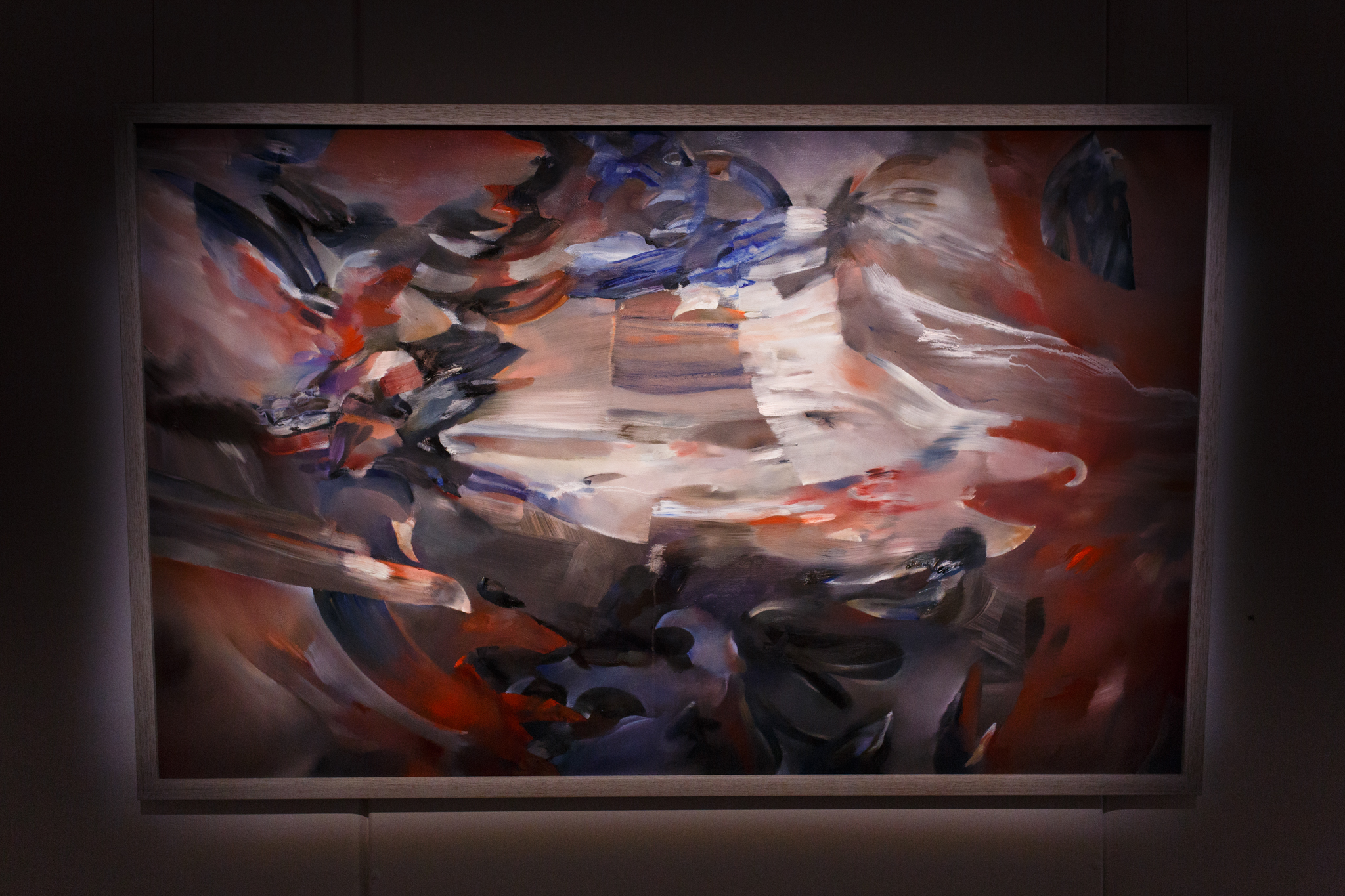 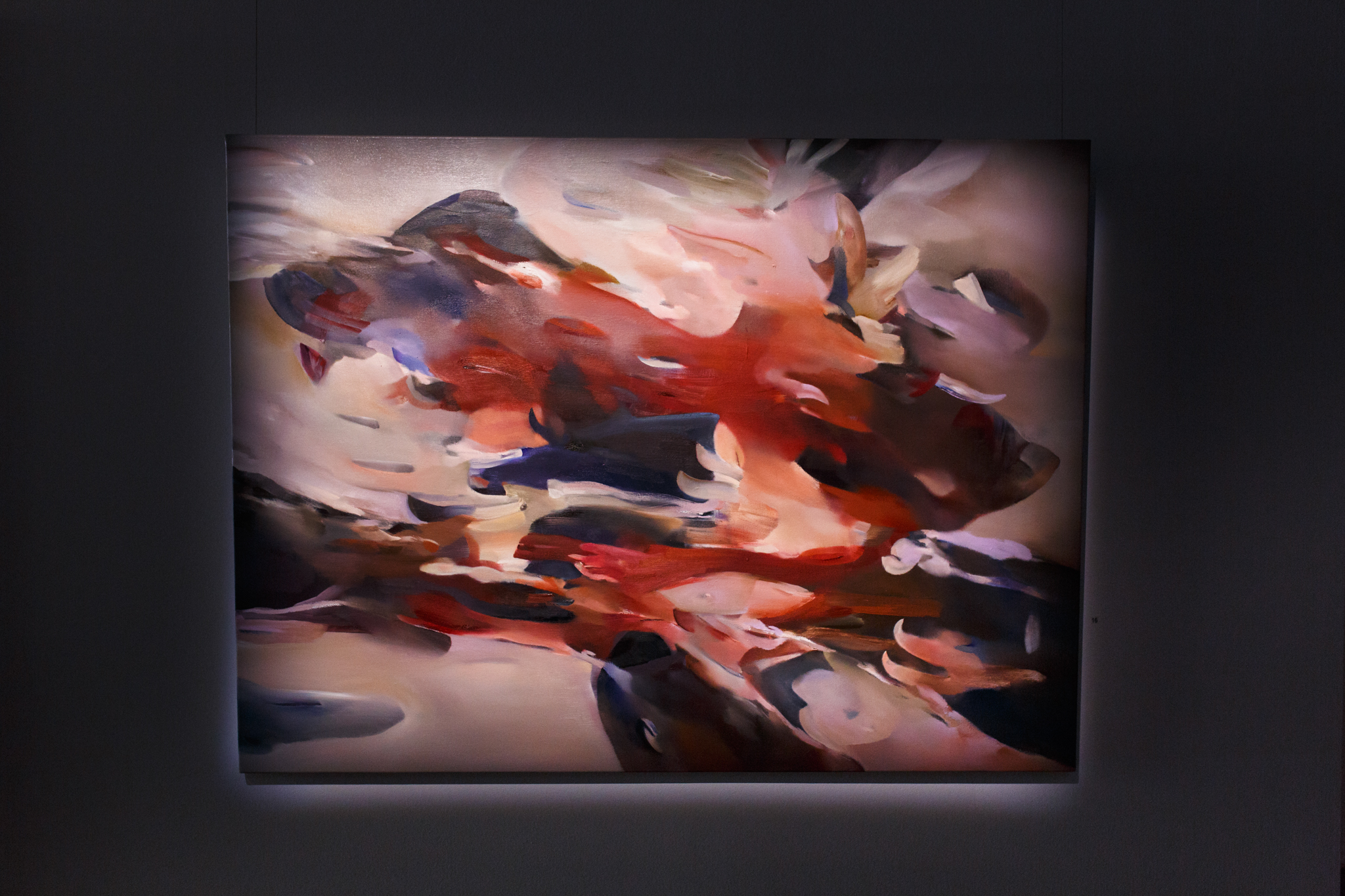