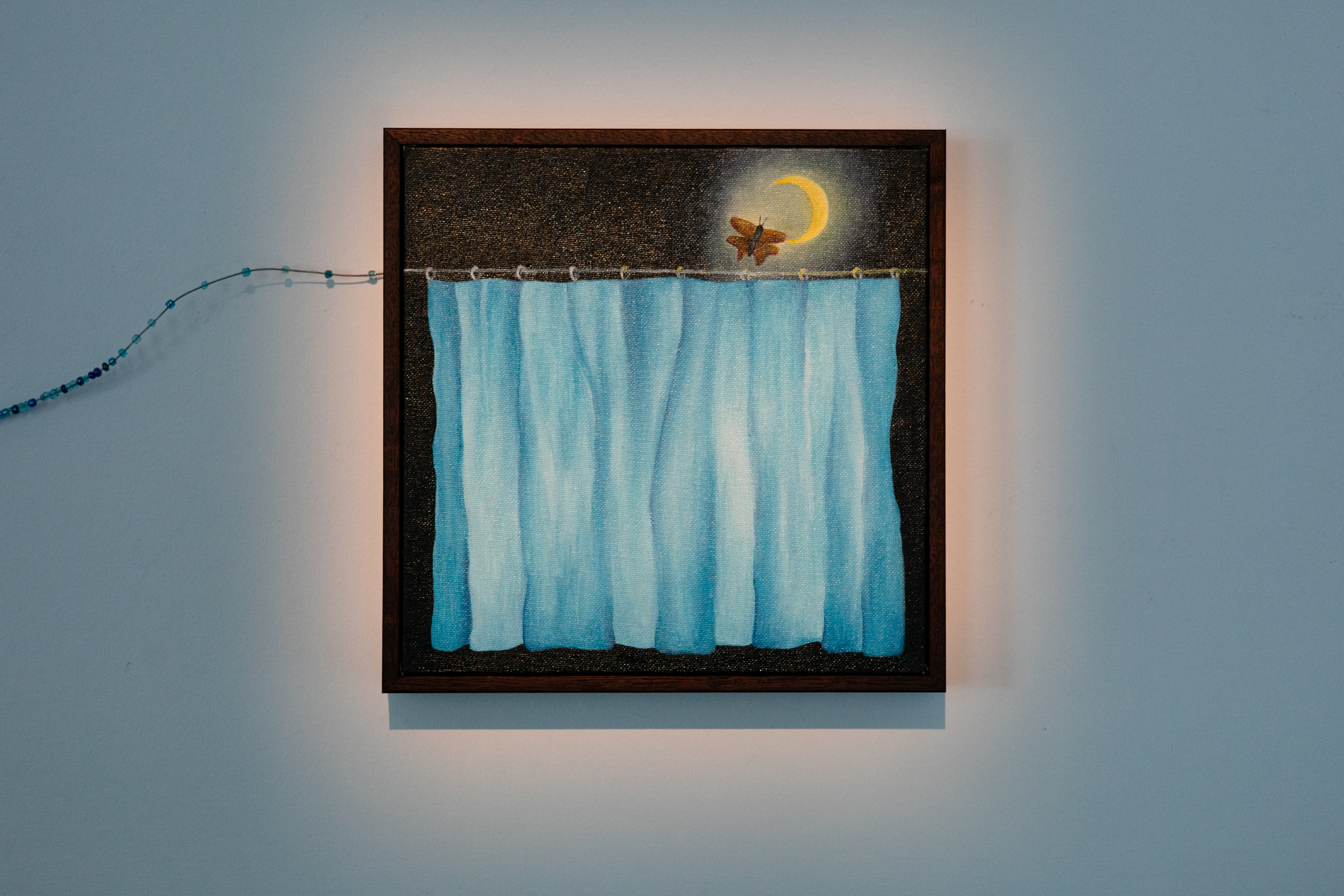 Luisa Hansal (b.1990, Auckland) completed her Master of Fine Art (High Distinction) at RMIT Universityand was awarded the Lowensteins Arts Management Graduate prize in 2017. In 2012 she graduatedfrom Edith Cowan University with a Bachelor Degree in Contemporary Arts, majoring in Visual Arts.Subsequent to graduating she was awarded a placement in the highly acclaimed annual

at PICA, and received a 6 week residency at the Edith Cowan UniversityPrintmaking studio. In 2014 Luisa underwent a 3 month artist residency in Berlin, Germany and inDecember 2016 she undertook a 6 week residency at PICA. Luisa has exhibited in both solo and groupexhibitions in Perth, Melbourne, Sydney and Berlin.

Luisa is the co-founder/co-director of artist-run space; Pig Melon. She currently resides at Gothamstudios in Northbridge and is represented by sweet pea; an art gallery opening in late 2021 in Boorloo(Perth) on Whadjuk Noongar Boodjar.

Something that lowers you and then letting go

A red rose lodged in sand on the beach

what an enchanting relation to have to the world

a kind of magic.

In the text Gravity and Grace by Simone Weil, she constructs a metaphor based around separation for understanding God:

“Two prisoners whose cells adjoin communicate with each other by knocking on the wall. The wall is the thing which separates them but it is also their means of communication… Every separation is a ink.”

Luisa Hansal's painting hospital curtain & gentle energy, 2021, conveys this separation. The curtain inhabits the majority of the composition and glows in blue, beckoning me. To the right, rising from behind the curtain, is a moth and a crescent moon. Separated or limited by the curtain, the moth and crescent moon become the link to explore what Luisa expresses as "some deeper meaning that I can’t articulate through speech". I feel this urge and inner contemplative ability to pull back that curtain.

Luisa’s paintings draw me in to a place inhabited by moths at night, five-petaled flowers, cold feet, reaching hands, moon, and rounded archways. These forms and symbols are sharing something with me, but never too much and just enough. Thus, a “tender understanding” is formed.

Sometimes, they surge towards me with such sacred urgency and sober sharpness before enfolding me again in nebulous ambiguity. In the aftermath, their many layered identities softly lap at my feet, reluctant to enfold once more.

They’re working on me.

Luisa’s nurturing of these symbols mean they move gently from figuration to abstraction, establishing a depth of identity for feelings of grief, compassion and sentiment. The pink dress, 2021, provides the kind of comfort and tenuousness that language won’t quite express. A hand at the top and six flowers, each with five petals, are suspended within the composition. They surround a pink shimmer and sometimes appear joined by thread. Undulating between fullness and fragility, I cannot tell if they are being willed into existence by the hand or even if they are delicately joined together. Sometimes, I decide that they are joined so I whisper “promise me”? as if that would help to demystify their presence. But then I think, that is the point. It was never meant to be easy. When a precariousness of understanding washes over me, it challenges me to trust the ‘not knowing,’ allowing the symbols to reveal themselves again and again.

Enveloped in this slippage of understanding, the symbols fade and I’m no longer grieving that loss, I’m embracing new things. A delicate magic has been performed.

Luisa said that the saddest thing about grief is that it is transformative and you slowly forget. The immediacy of that process evolves, or rather, is ever-becoming. It’s inevitable. It is the same with Luisa’s symbols. The more they are represented, the more they transform, their imminence mutating and waning.

Looking down upon three objects: a brown crate with a red velvet cushion, a green shell pool filled with water, and a thick rectangular blue mat. And inside that shell pool, the reflection of the water reveals this strange shimmering archway. I think, maybe, it’s an archway into a new chapter.

New things to hold, new forms of meaning, more hands to hold something. 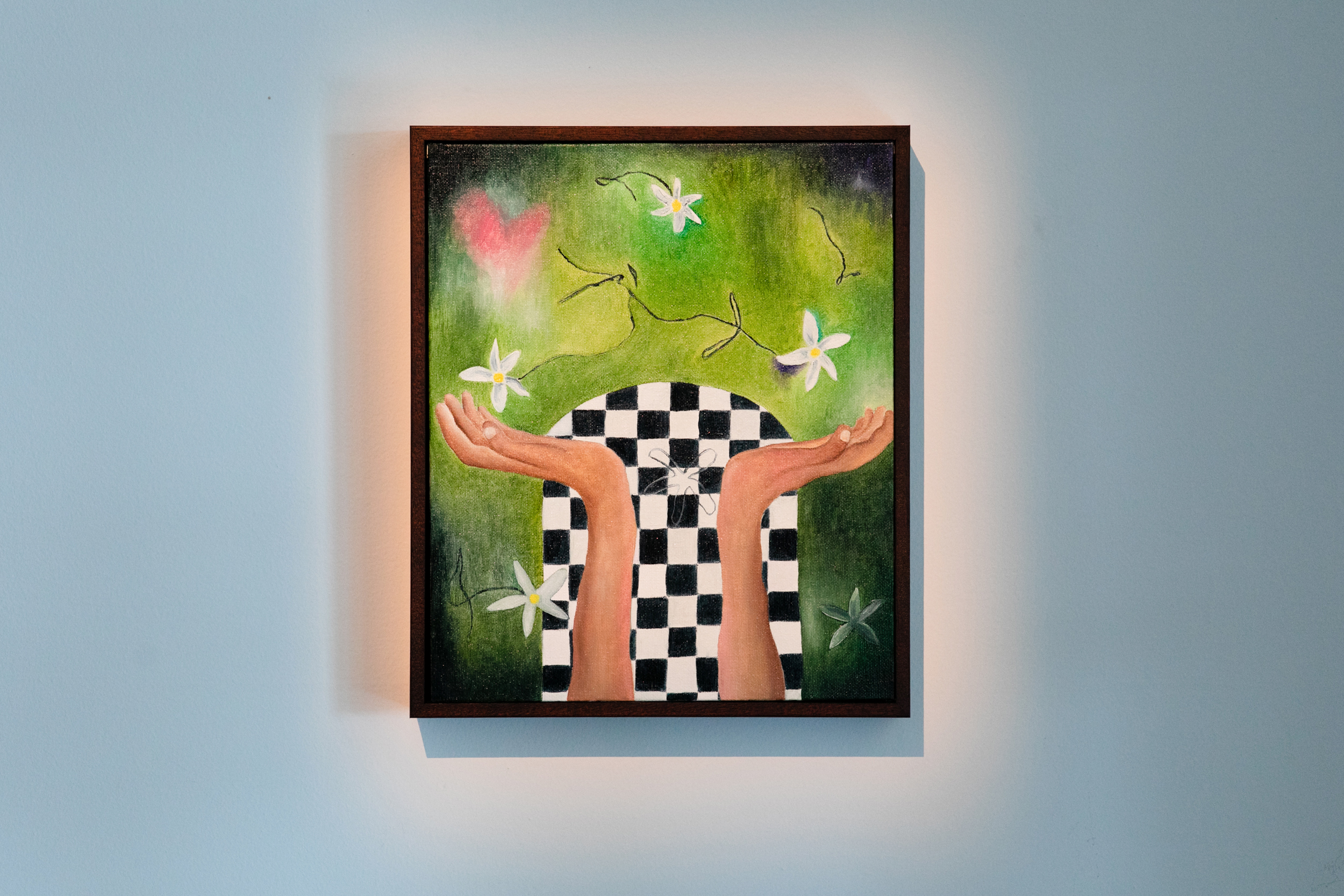 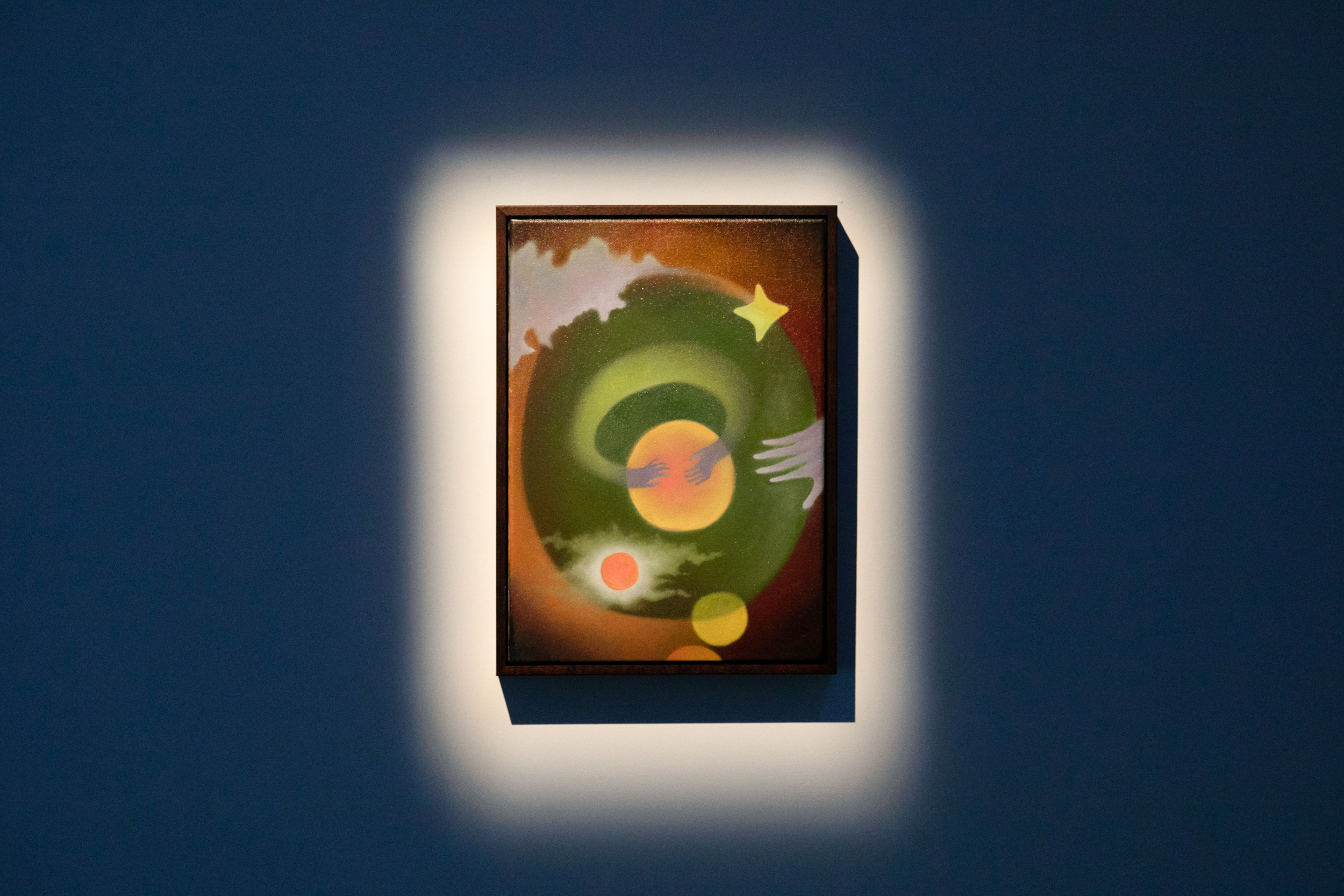 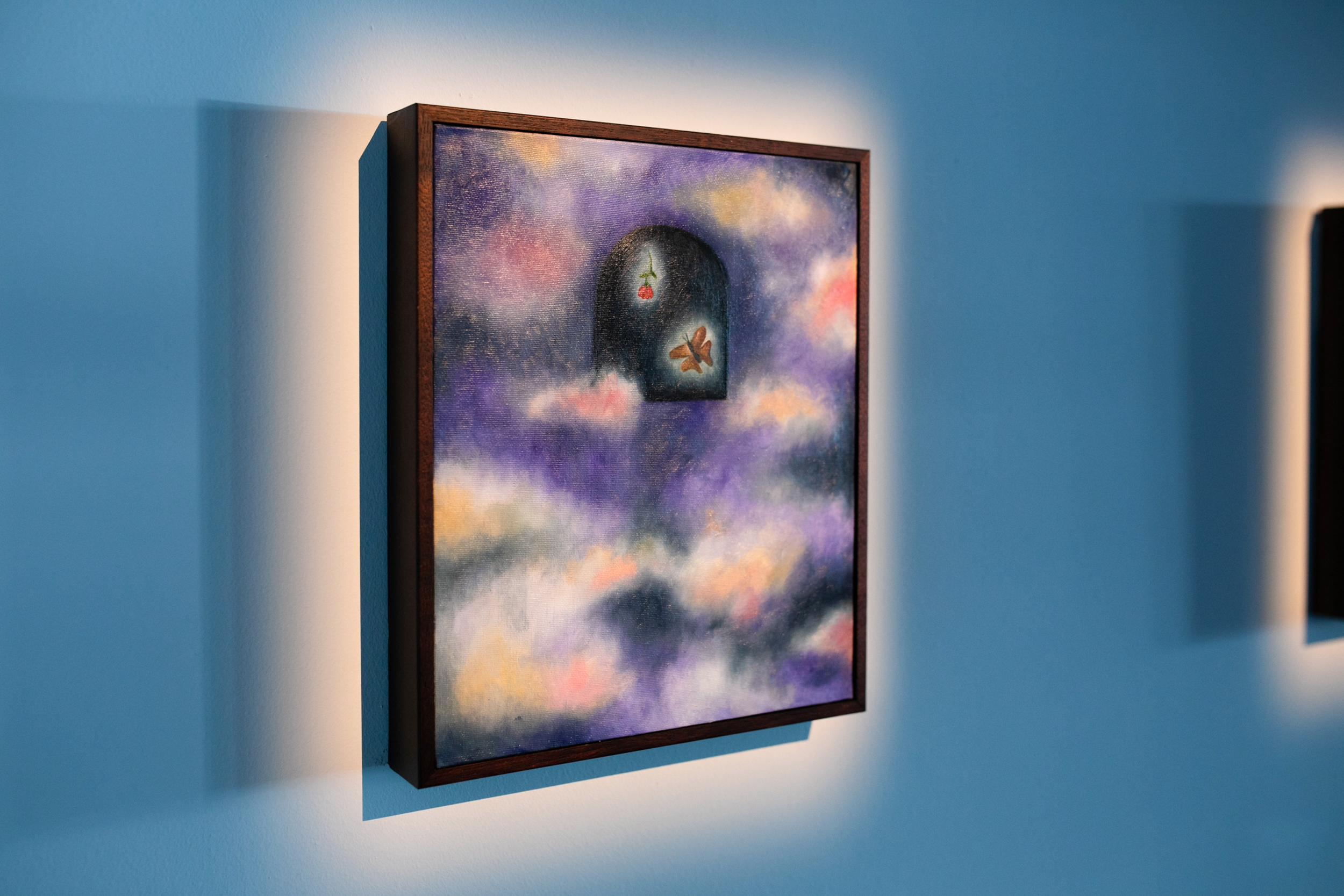 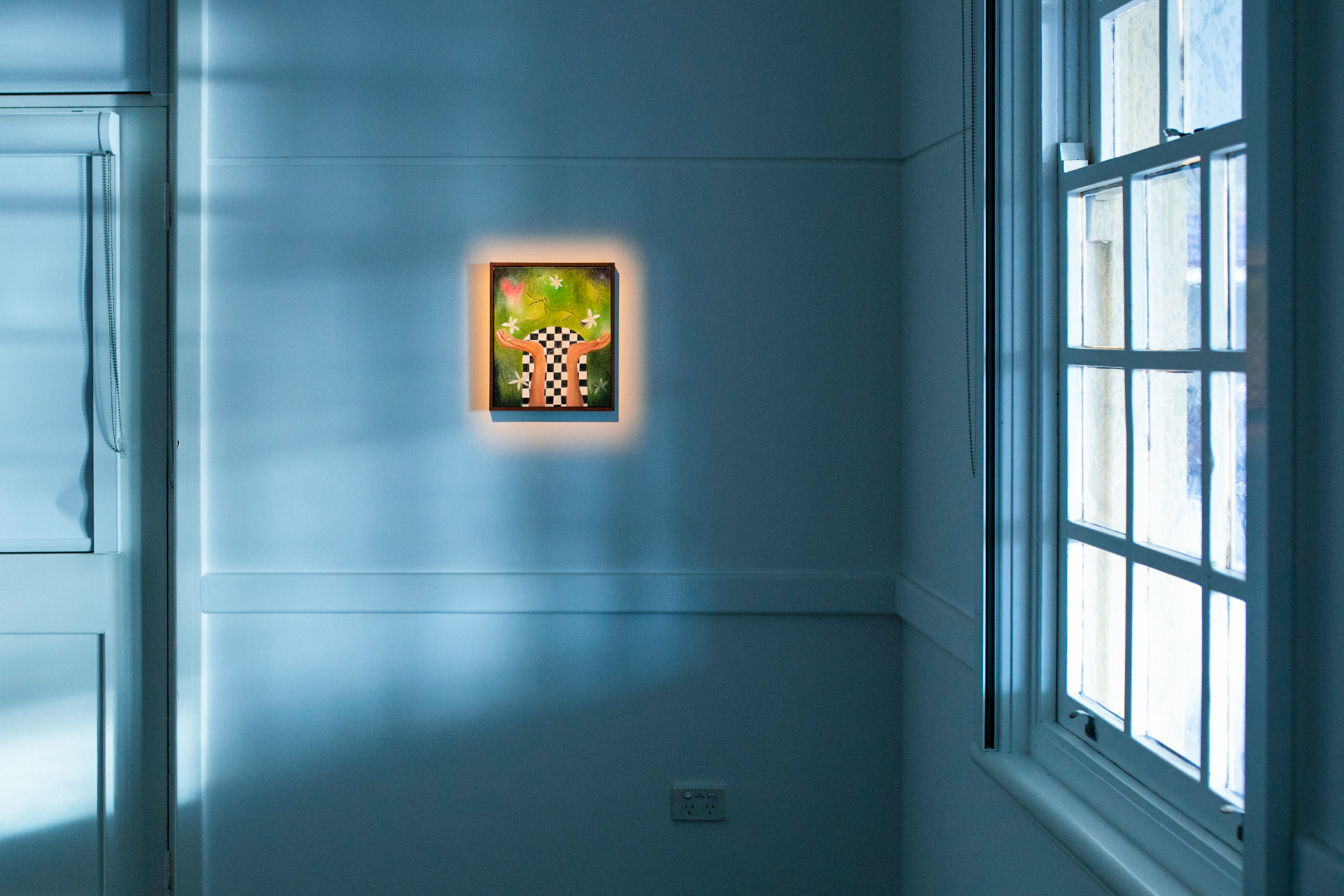 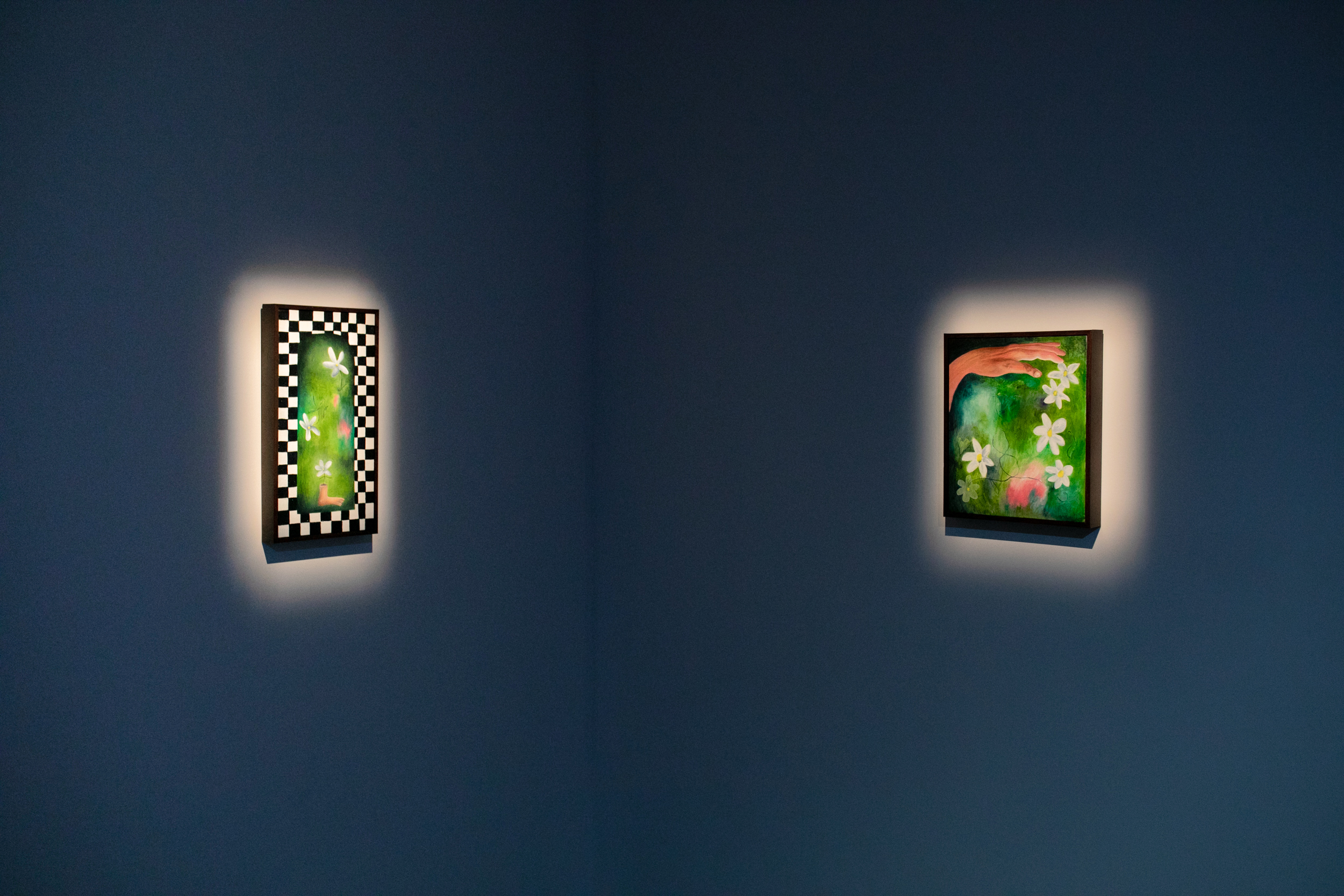 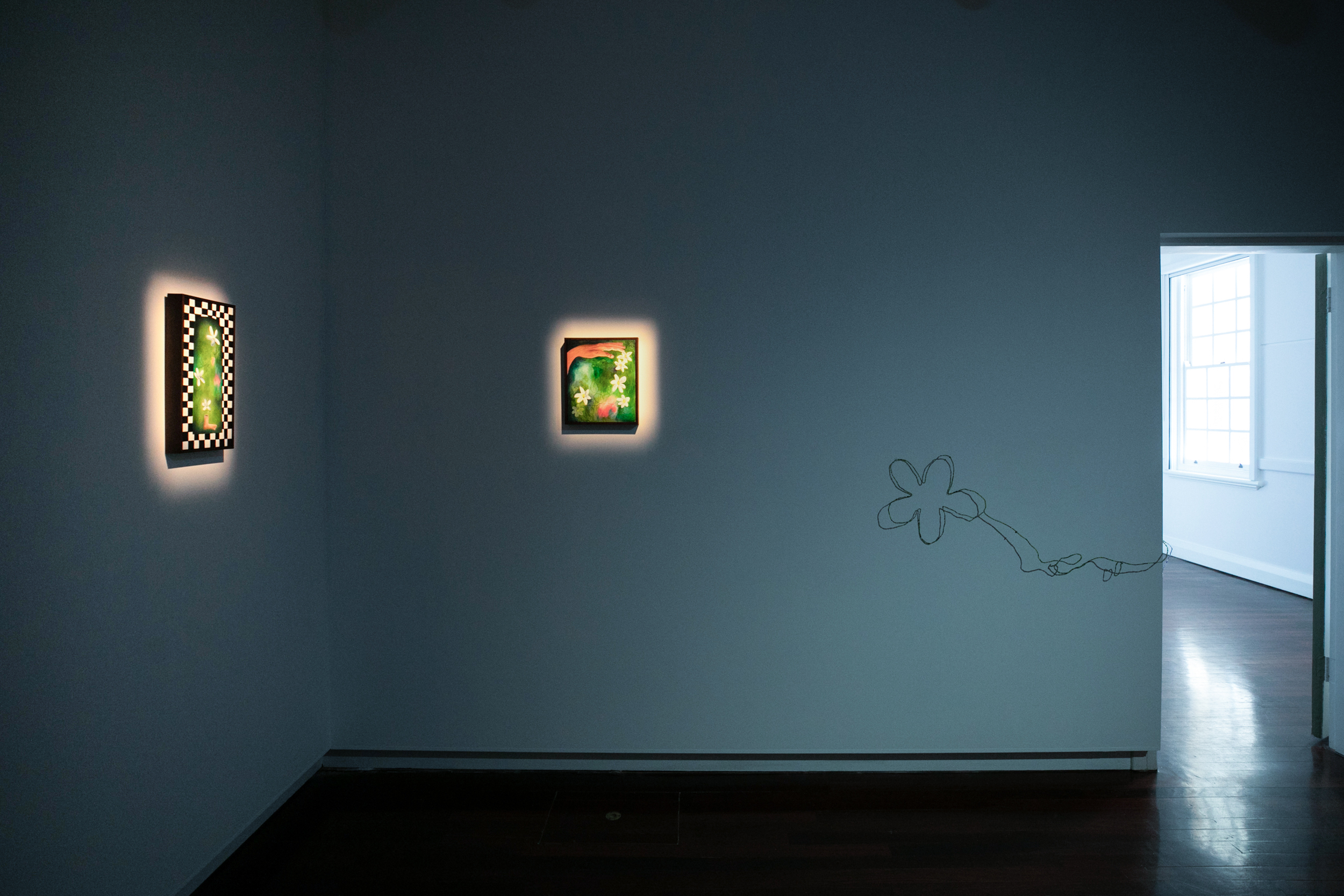 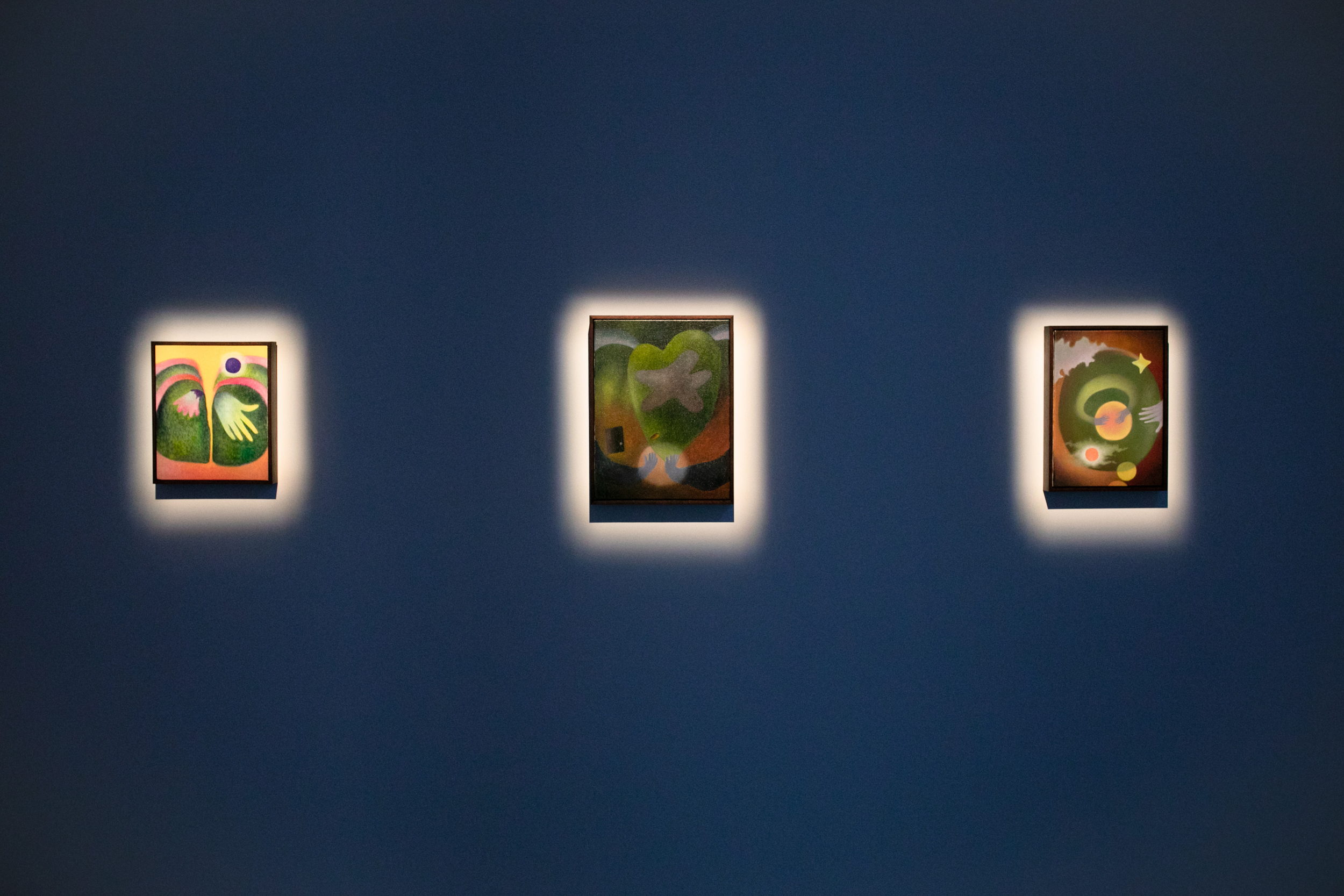 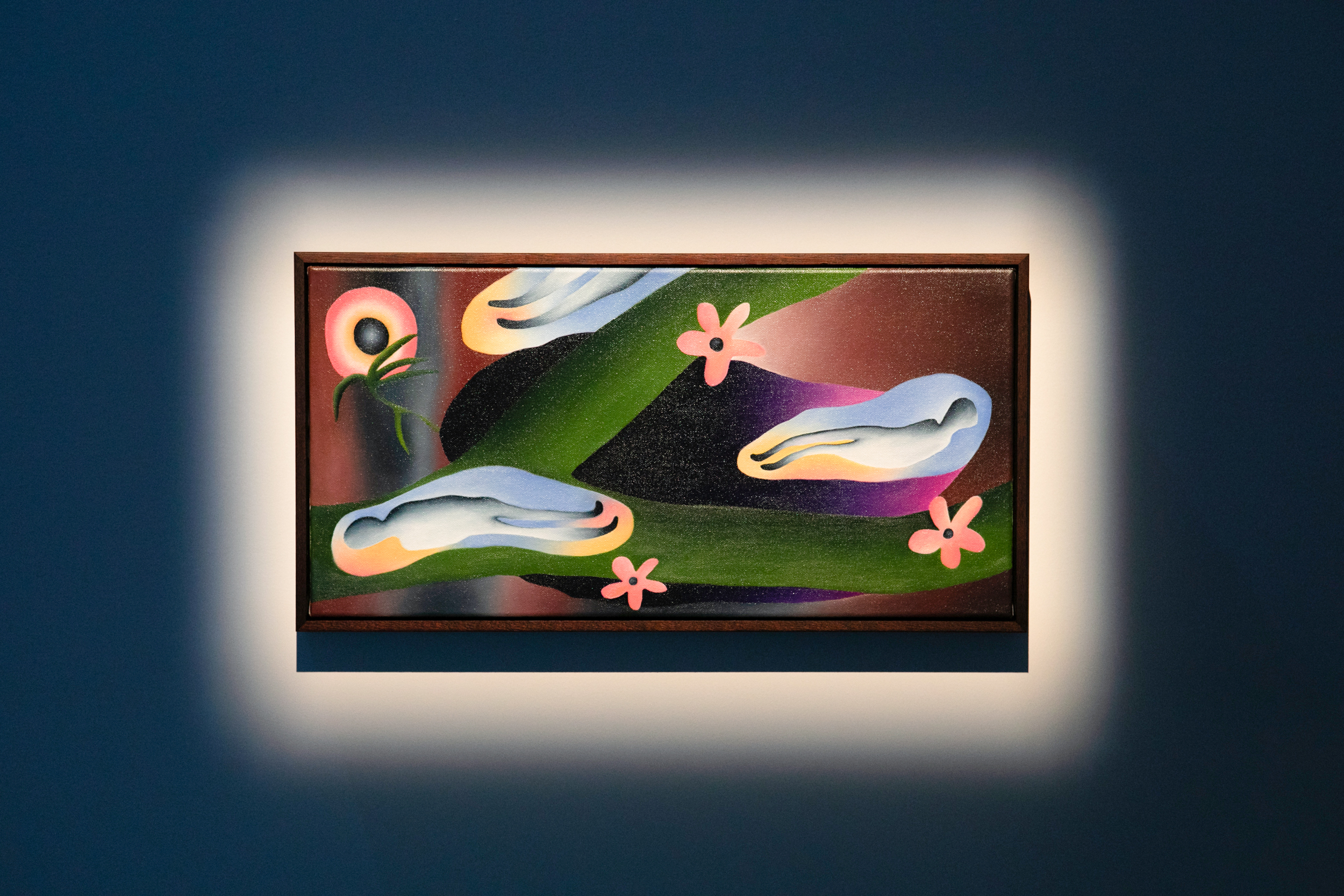