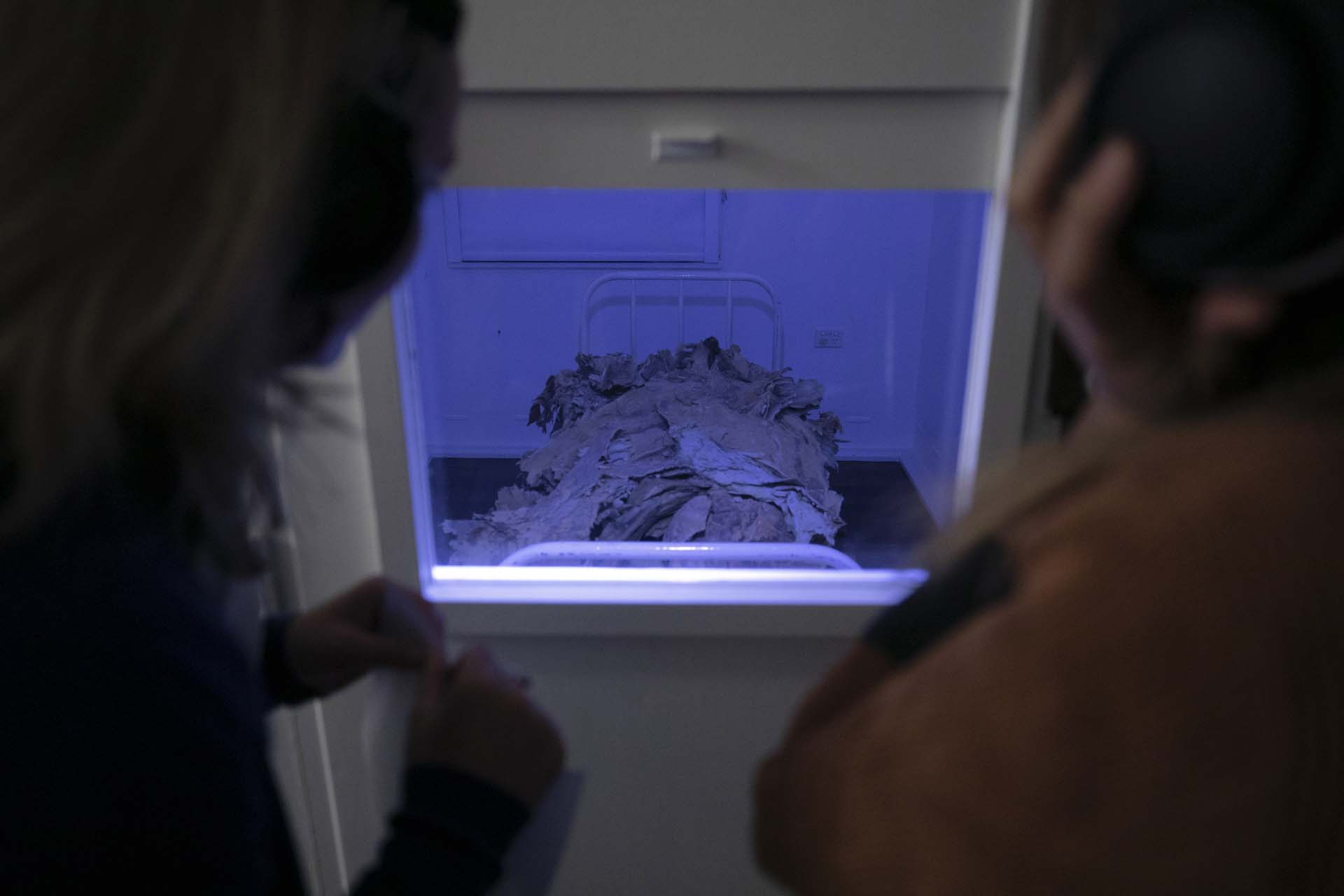 Goolugatup Heathcote is pleased to present Inside Out, a significant new exhibition from Curtis Taylor as part of its Tilt programme of site-responsive exhibition commissions. This series of photographic, sculptural, and paperbark works is made in response to the unique history and landscape of the site, and produced in our residency studios.

Curtis Taylor is a contemporary artist working in film, installation, sculpture and painting. Taylor is a Martu artist, and prominent among a generation of cultural leaders from the East Pilbara representing their culture on the national and international stage. His work has been exhibited widely and significantly, including the Museum of Contemporary Art, National Museum of Australia, Perth Institute of Contemporary Art, and Fremantle Arts Centre.

This exhibition is a part of Tilt, an annual site-specific exhibition at Goolugatup Heathcote, now in its 13th year.

Goolugatup Heathcote is ‘the place of children’ for the local Beeliar Noongar people. Since British invasion it was also considered by James Stirling as the potential site for Perth City. It housed the Point Heathcote Reception Home and later Heathcote Hospital (1920s to 1990s) and has a long history (pre- and post-invasion) as a site for recreation and pleasure. It is, ultimately, a site of deeply conflicting histories, histories manifested by inner conflict doubtlessly felt by generations of Aboriginal people brought to Heathcote Hospital from across Western Australia for treatment of ailments including mental illness, substance addiction, and disorderly behaviour.

For TILT, Goolugatup Heathcote’s invitational exhibition program, Martu artist Curtis Taylor interrogates the physical and spiritual dislocation of Aboriginal people inside and outside bounds of the institution of Heathcote Hospital and the cultural deprivation they experienced in this place.

Taylor has worked with film and multimedia in the first decade of his career to tell the stories of his community in Martu Wangka, as well as offer timely, often prescient, narratives of contemporary identity. During this time, he has been involved in landmark art projects including Yiwarra Kuju: The Canning Stock Route (National Museum of Australia and FORM 2010), We Don’t Need a Map (Martumili Artists and Fremantle Arts Centre 2012), In Cahoots (Fremantle Arts Centre 2017) and Collisions (Lynette Wallworth 2017).

In Inside Out, his second solo exhibition, Taylor has undertaken site specific work for the first time. Early in his residency Taylor stated, ‘I have given a lot of thought to what Heathcote was, and what it is today, for a lot of different people. Even for people who live in this area or families of patients or people who have gone through Heathcote. I don’t have a cultural attachment to the site; I am working with what I see around the area. I have explored the records of Heathcote and have been thinking of the stories that came from this place.’

There is very little reporting on Aboriginal people in mental institutions in Western Australia. There are no recorded figures on the number of Aboriginal people admitted to Heathcote or the nearby Graylands Hospital in Claremont. However, the recorded place of origin of most Aboriginal admissions to these hospitals was consistently outside the metropolitan area, and, in most cases, from the far north at least 1000 kilometres away. The tensions between the geographically centralised systems of Western medicine and the important role that connection to Country and proximity to family play in the role of healing and wellbeing for Aboriginal people can be particularly felt in this place, according to Taylor.

‘It is still happening today, with people coming from regional areas into major centres to receive special care, treatment or operations. A lot of people feel sicker because they are not back in their home Country getting that kind of service. Their Country would make them feel better. I remember coming to Perth and being in hospital; I just wanted to go home. People get better quicker if they are around their own people and their own Country.’

In the 1960s, an unidentified Aboriginal man was known for painting landscapes and hunting scenes at Goolugatup on paperbark gathered from surrounding trees. He would walk from door to door selling his wares for two dollars. His name and identity are unknown, though we could imagine that he was perhaps living on site in a temporary shack on the waters’ edge while he waited for a loved one receiving treatment in hospital before taking them back home to their Country.

Taylor has rehearsed and echoed this artistic gesture 60 years later—gathering bark from the site and painting it with images that asks questions of this space, its buildings, and its memories. Who was here? What happened to them? How did the people feel? In his film and photographic work for Inside Out Taylor explores the inner turmoil experienced by an imagined patient at Heathcote Hospital. He projects himself into their inner world by calling on his own battles with alcohol and addiction. The film depicts the endless binding and unbinding of an unblemished body with white bandages. Heads are cradled in hands. A wine bottle nestled amongst paperbark is wrapped with the same bandage. The ‘treatment’ itself imposes isolation, deprivation and shame on Taylor’s body. It considers the way in which people with illnesses related to their mental state, including addiction, are often treated as having flaws of the whole character. This kind of treatment is futile at best, but more problematically, it amplifies suffering.

Taylor’s photographic works are inspired by the work of Polish dystopian surrealist artist Zdzisław Beksiński who, like Taylor, was interested in psychological self-portraiture. His post-World War II photographs of asylums during the Soviet occupation of Poland are some of his most aesthetically simple works. The abject horror in his photographs lies in the unseeable mental illnesses and the ways in which they are treated. Obscured, disrupted, and compartmentalised, Taylor’s photographs give us sense of the abstract and seemingly senseless concept of hospital treatment for Aboriginal people seeking mental wellbeing.

Inside Out brings Taylor’s signature talent for physically and performatively embodying narratives to depict the dislocation, deprivation and disillusionment of Aboriginal people who interacted with Goolugatup and Heathcote Hospital. The artist’s photographs, film, bark paintings and installations echo the physical space, stories and experiences he has researched and imagined. He urges us to interrogate what it means to receive care and treatment away from Country and the necessity but inevitable failure of this approach to wellness for Aboriginal people. 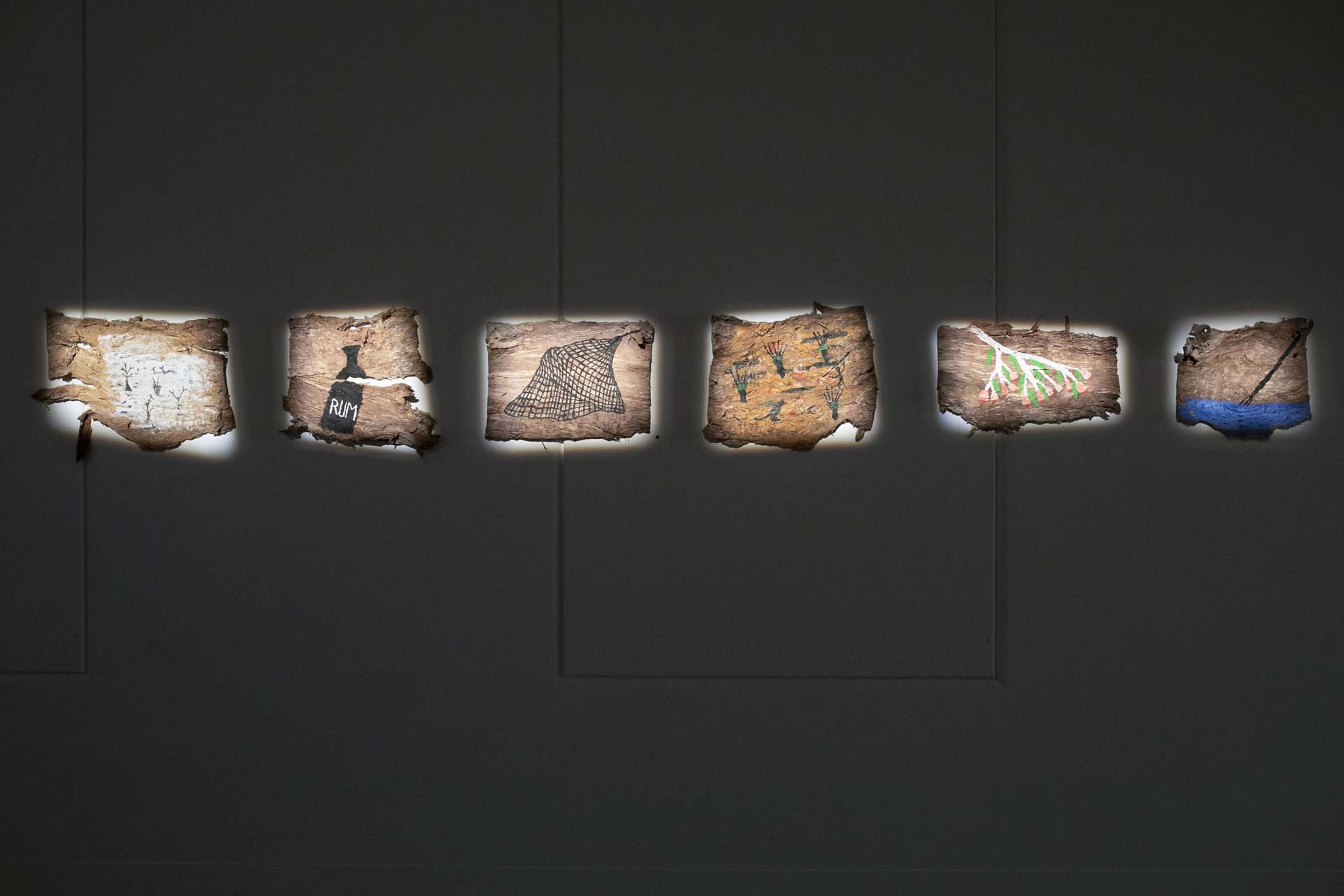 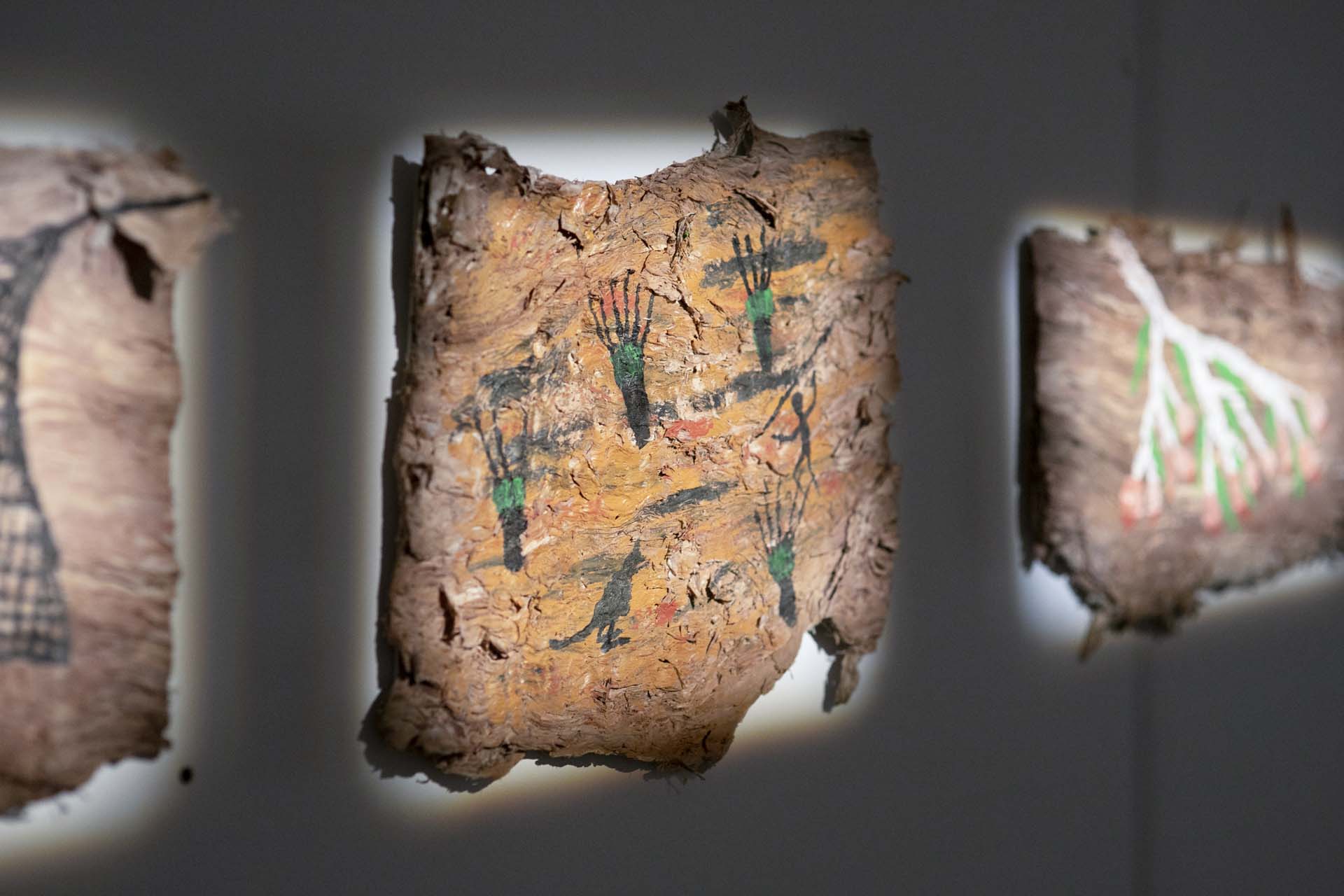 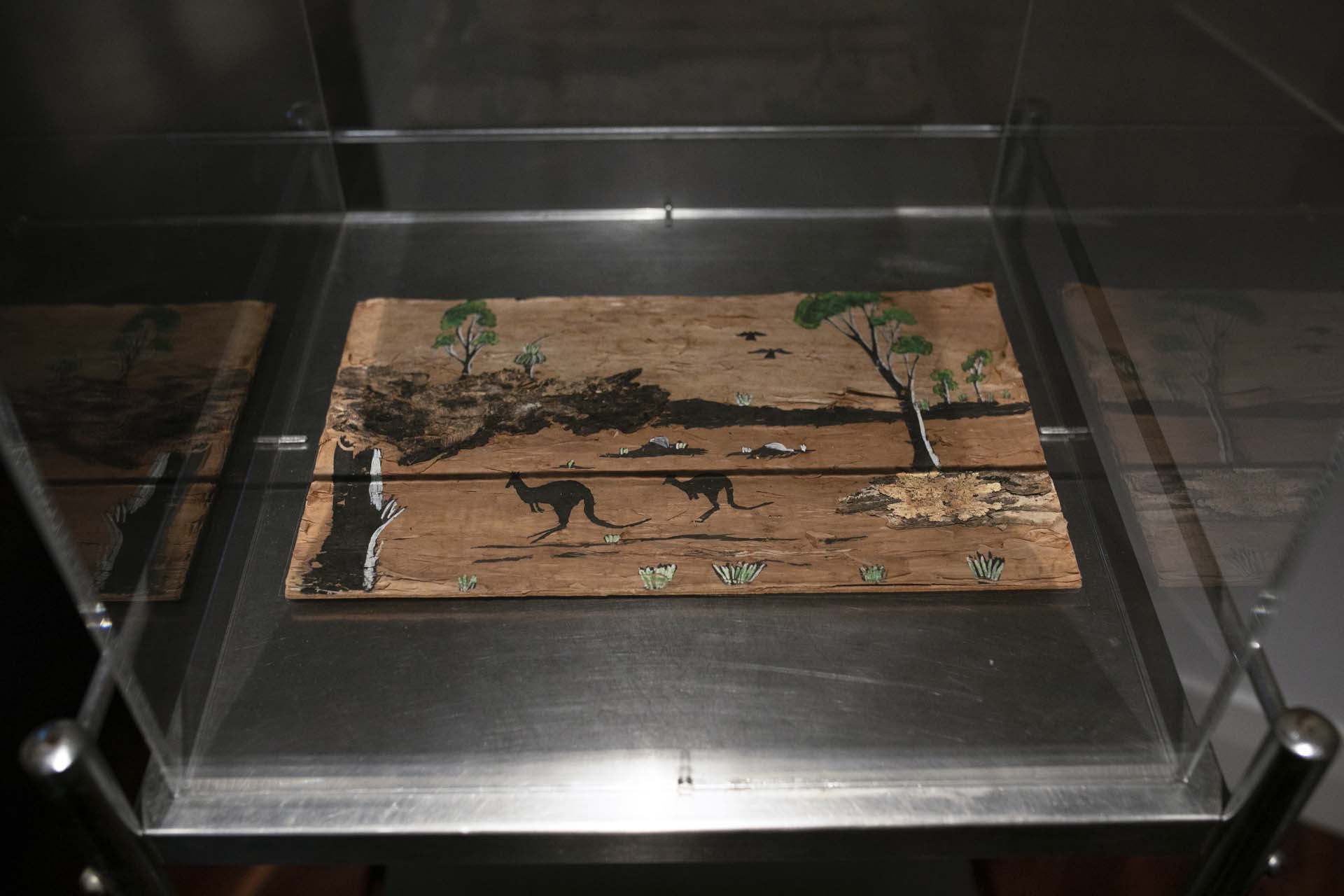 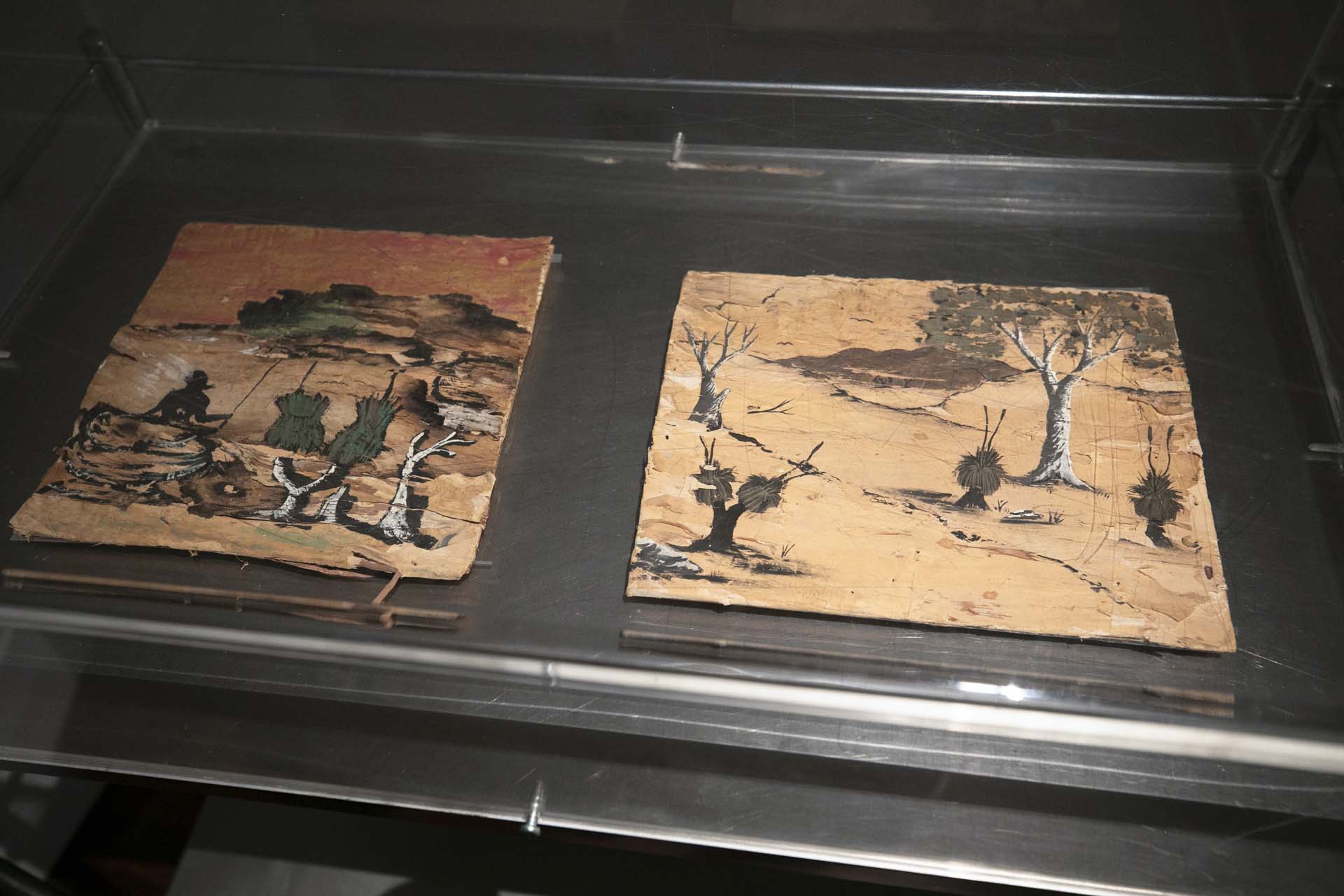 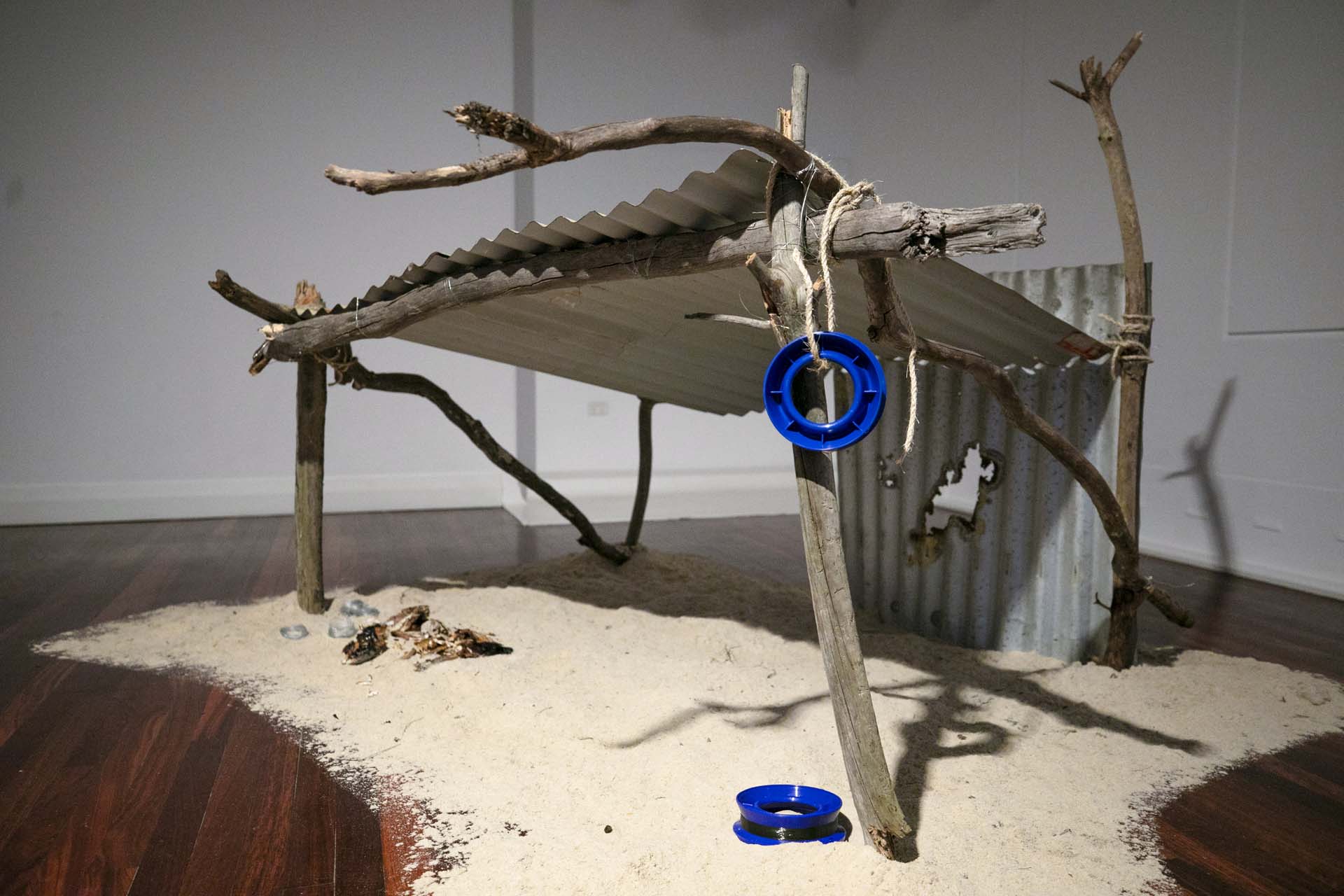 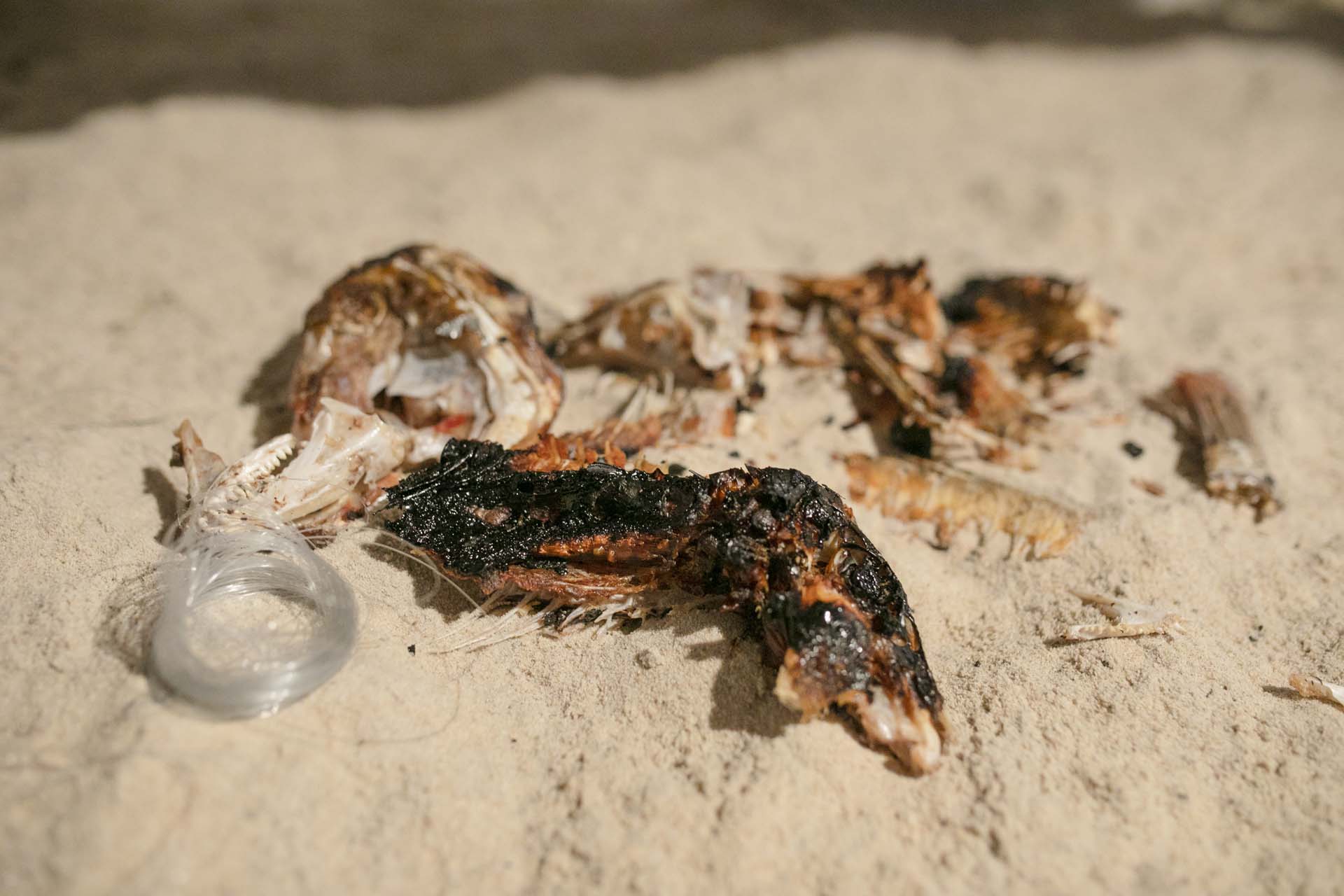 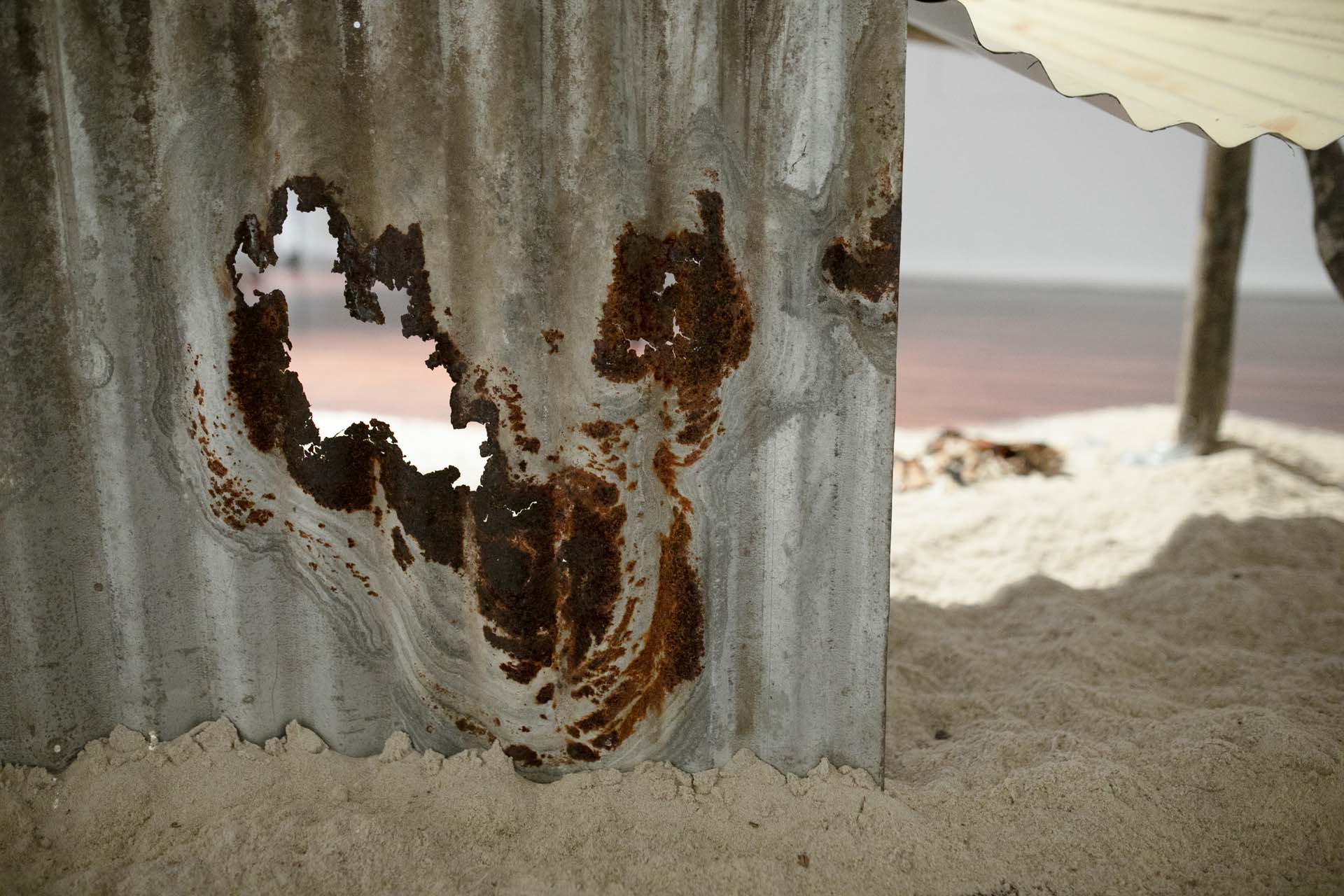 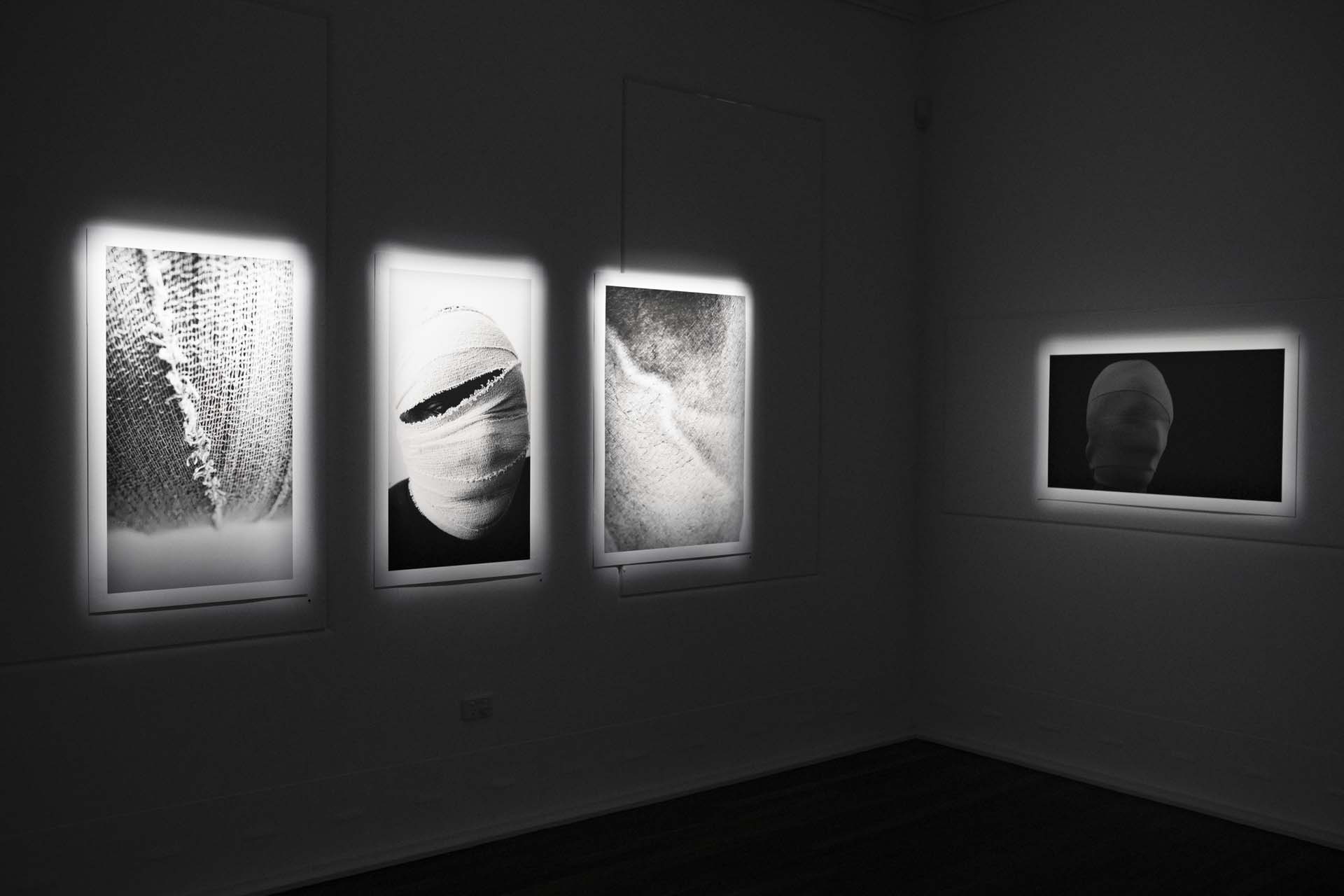 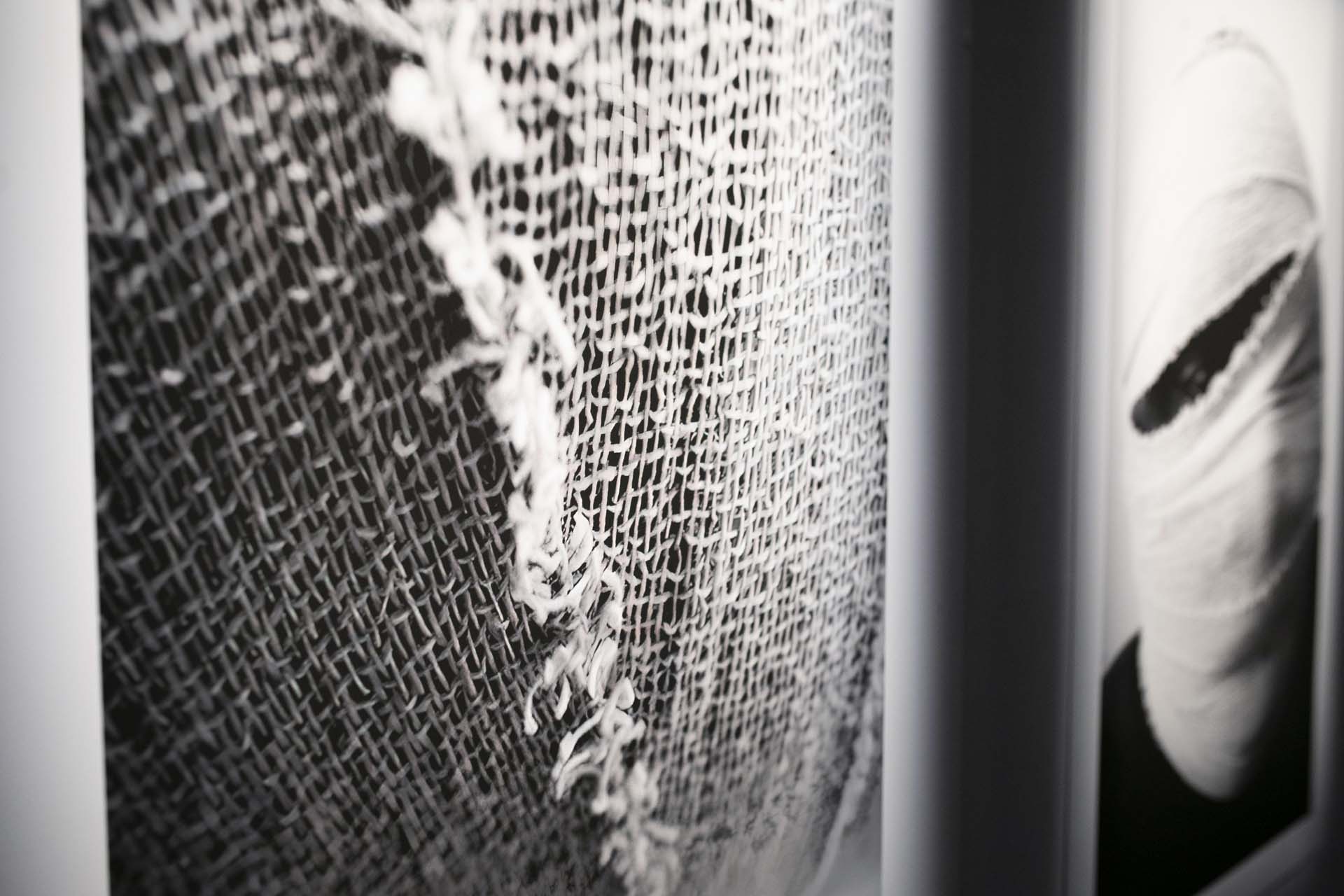 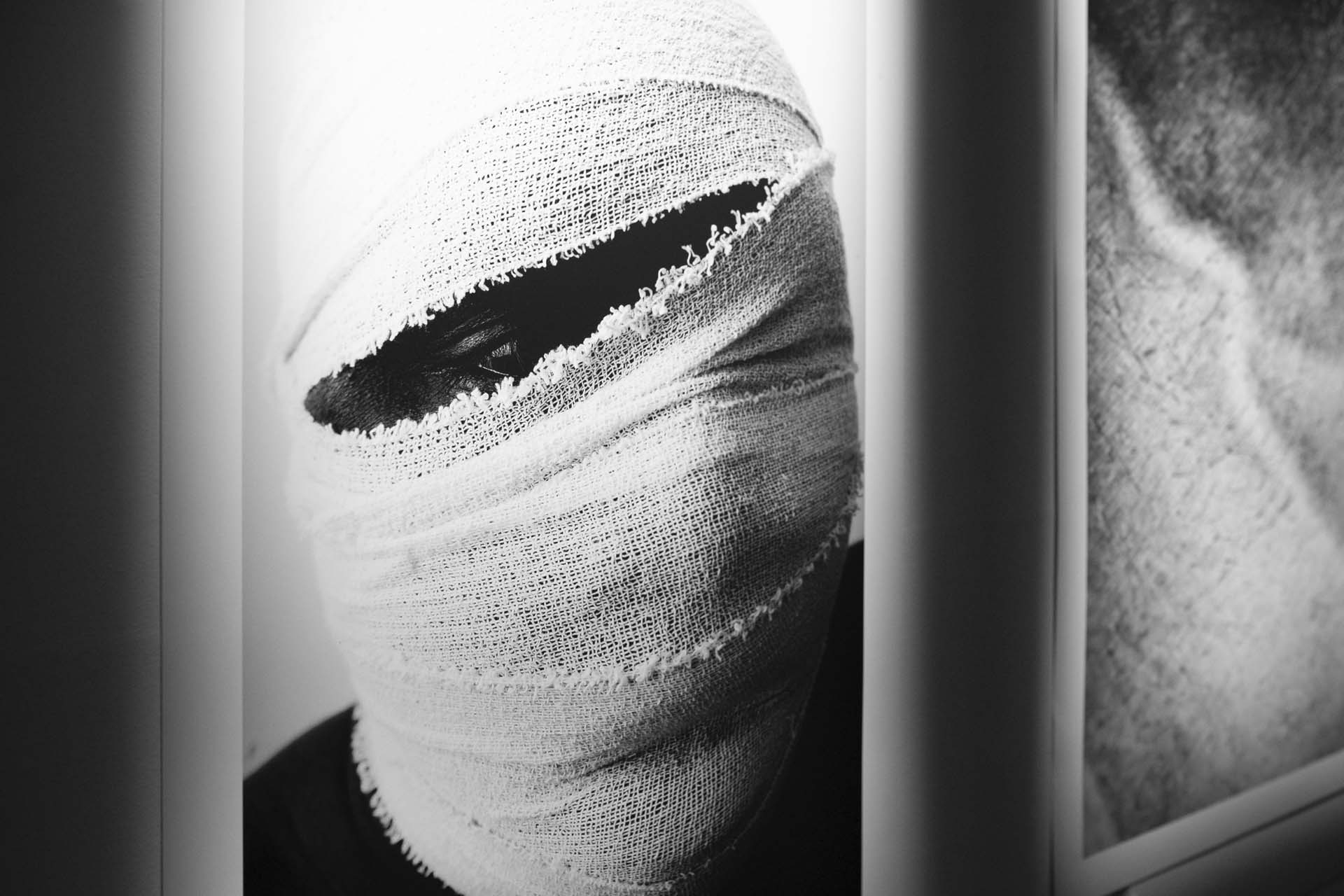 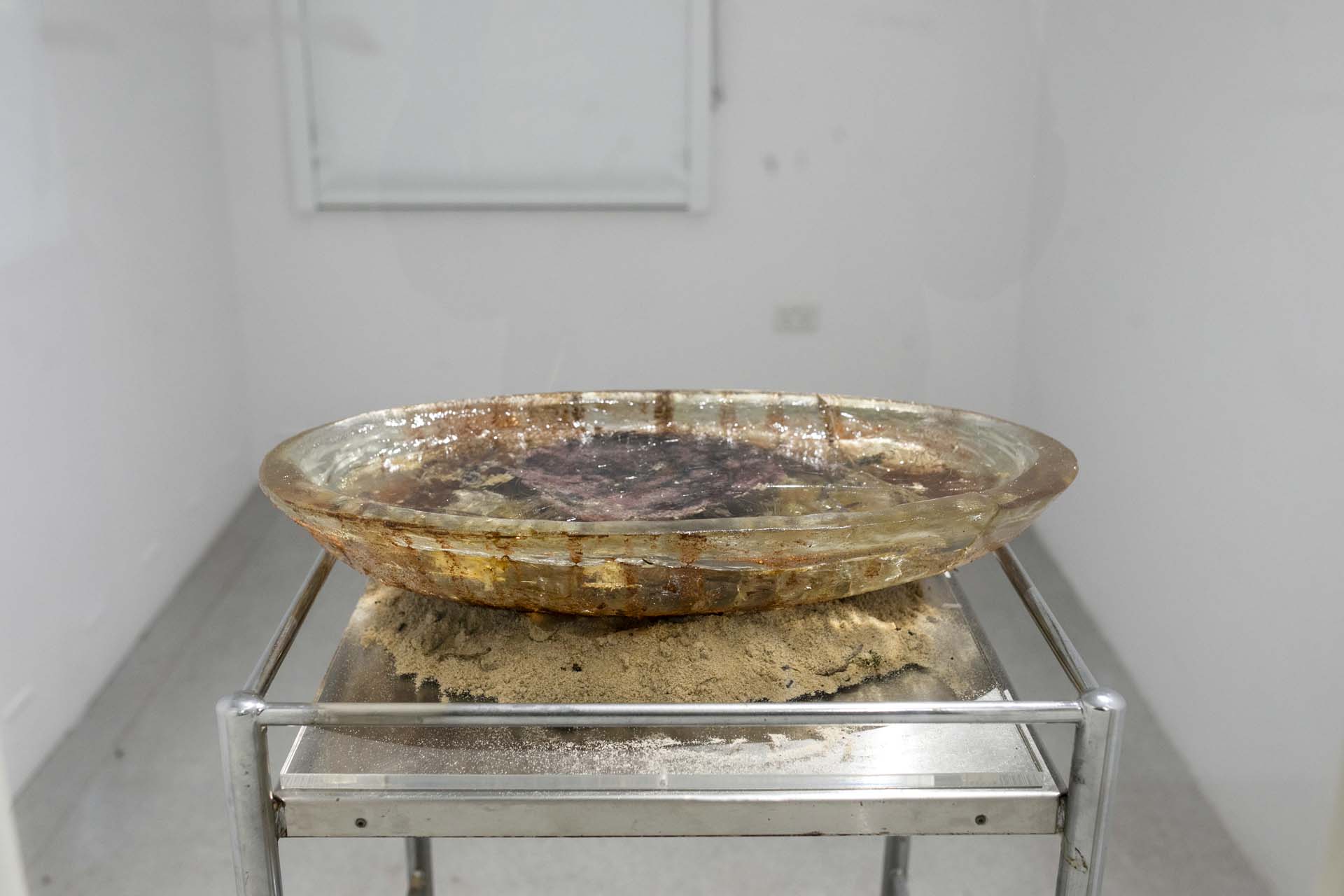 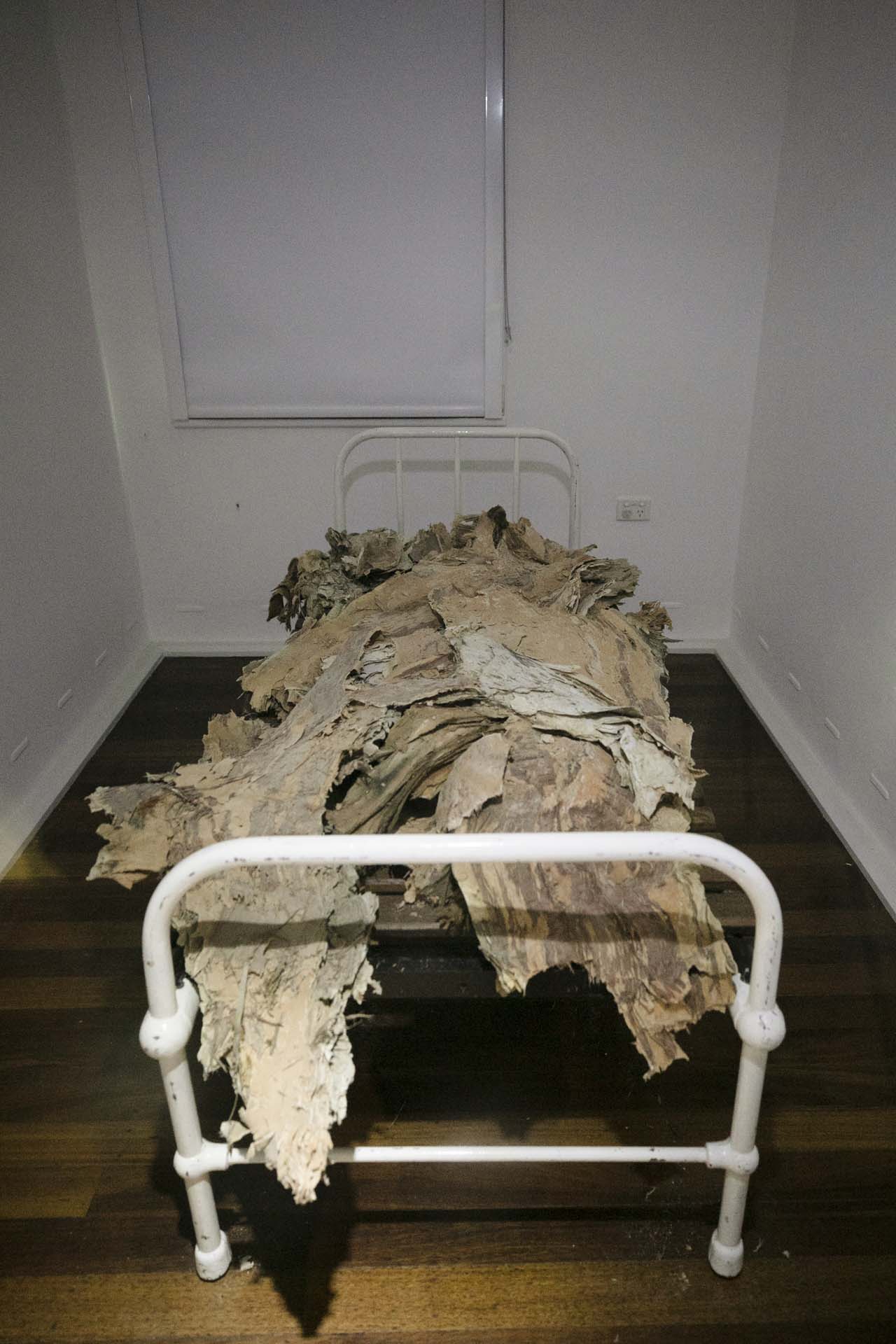 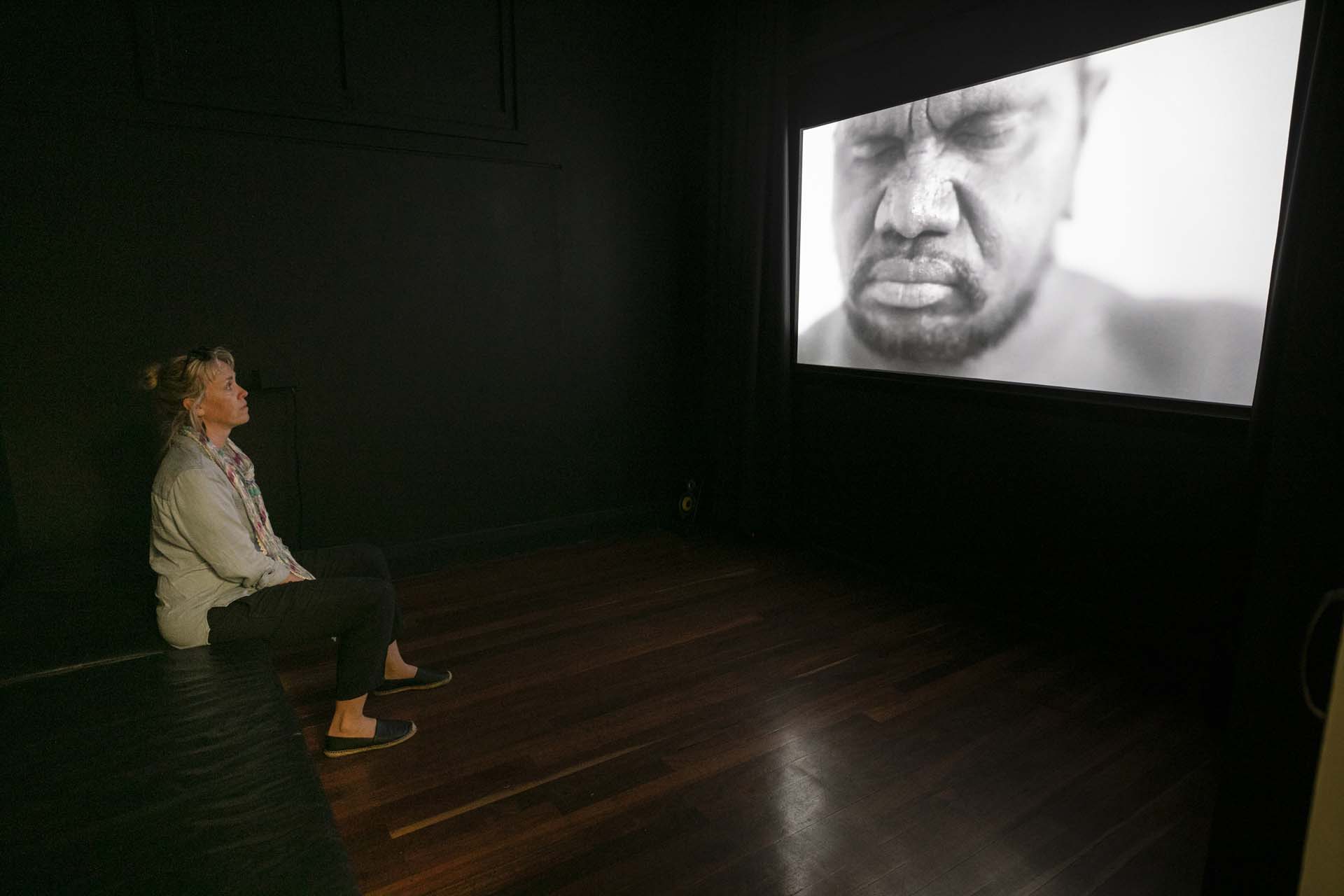 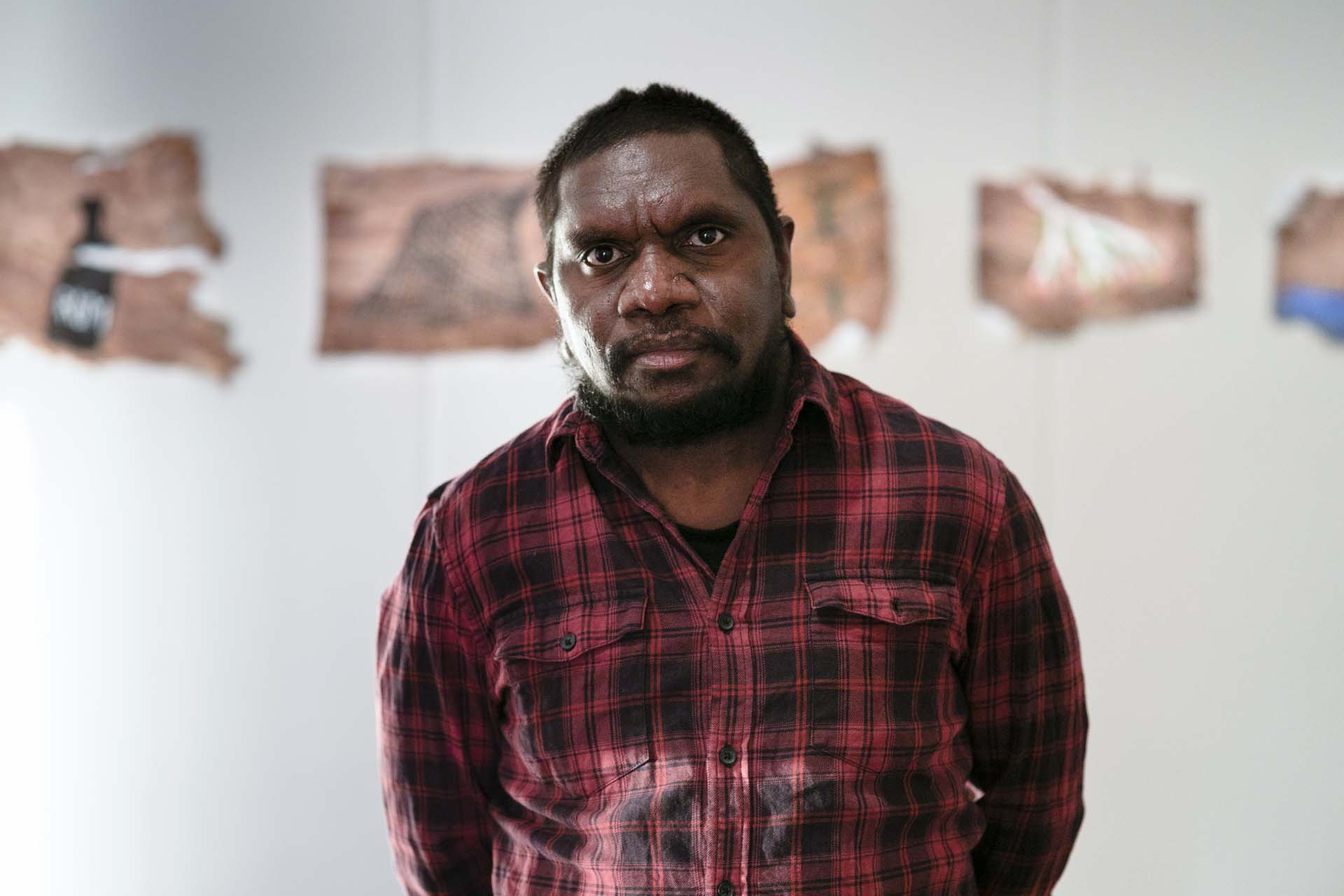 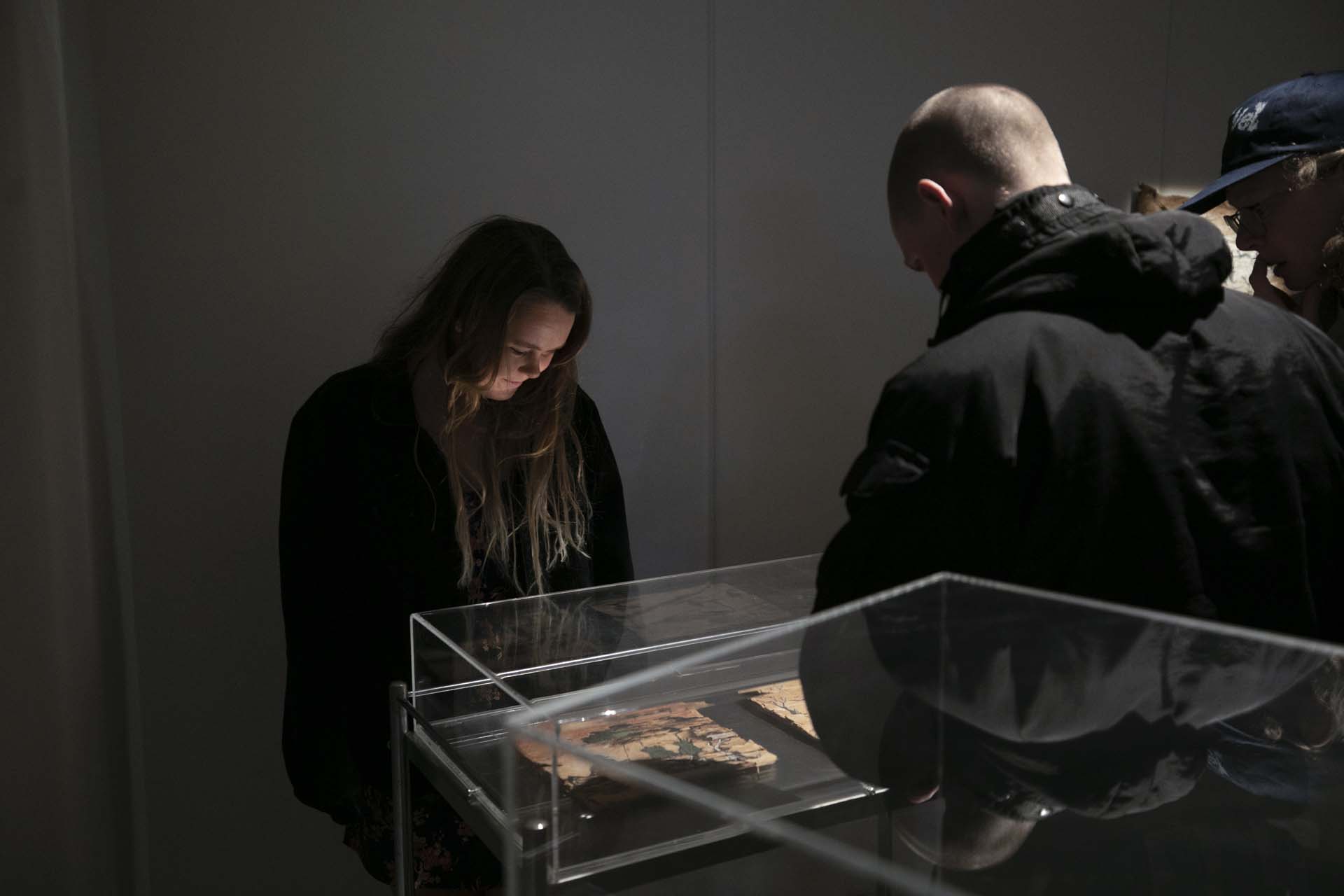